Men’s basketball digs deep to pull out win over Mohawk 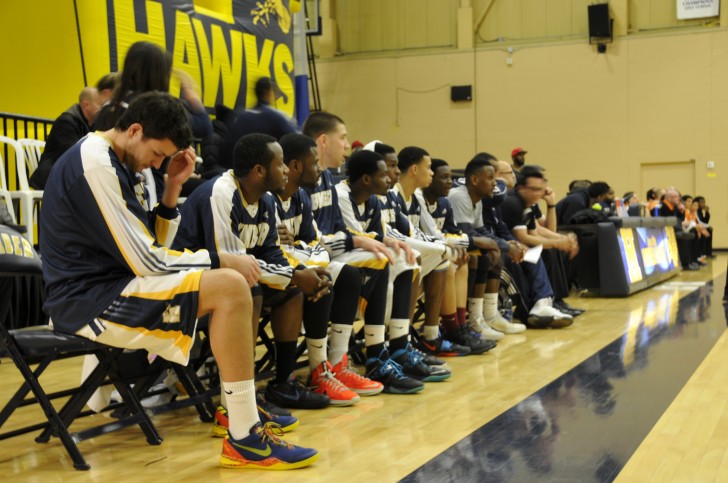 The Humber Hawks men’s basketball team looks on as they take on the rival Mohawk Mountaineers.

After squandering a double-digit lead, the Humber Hawks men’s basketball team had to dig deep to scrape out a 76-72 victory over divisional rival Mohawk Mountaineers, vaulting them past Mohawk into second place in the OCAA West Division.

The game-changing play for the Hawks came on the defensive side of the ball, as second-year player Tyrone Dickson came up with a game- saving block to give the Hawks a shot at pulling out the victory.

“He makes a huge difference for us when he’s on the court with his rebounding and defense,” said power forward Chad Bewley, a fourth year fitness and health student.

Dickson, who sat out last semester due to academic ineligibility, used his hustle and grittiness to outmaneuver the bigger Mountaineers in the first game between the two squads, since a dominating 94-80 win by Mohawk.

The all-star forward stayed in shape by taking part in Humber’s extramural basketball program, and didn’t show any rust as he finished the game with six points and 10 rebounds. Nine of those rebounds came off the offensive glass to give the Hawks some extra possessions.

A bitter rivalry has grown between the two teams, dating back to 2012 when Mohawk defeated Humber in the gold medal game to deny the Hawks a chance at a fourth consecutive championship.

After consecutive losses to the Sheridan Bruins and the Mountaineers in November, the Hawks have improved drastically.

A noticeable difference was the Hawks’ shooting stroke on the perimeter, something that wasn’t there in their November defeat to Mohawk.

Hawks’ assistant coach Ben Sanders, agreed that their three-point shooting was a significant factor in his team’s victory.

The team went 14-for-34 from the three-point line, a significant improvement from their 8-for-35 performance in November.

Bewley, R.J. Ramirez and Brandon Sam-Hinton made multiple baskets from beyond the arc to combine for 10 of the Hawks’ three-pointers.

Ramirez, who earned player of the game honours, finished the game with 21 points, along with five triples, four steals, and the game-winning three.

While trying not to look too far ahead, Bewley said that a possible playoff matchup with Mohawk would mean a new level of physical intensity that the Hawks must adjust to if they’re going to have another shot at bringing home gold.