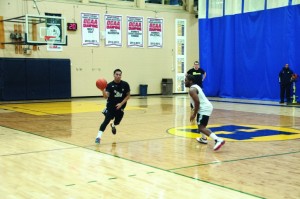 RJ Ramirez moves the ball up the court in practice. (Jeff Sehl)

Their win streak was on the line, but a victory over Fanshawe kept the Humber men’s basketball team undefeated in 2014.

With their 78-64 victory over Fanshawe, the Hawks improved their record to 10-3 on the season and 4-0 in 2014. In the win, first-year shooting guard Junior Davis, who contributed 11 points off the bench in the win, led the Hawks.

“I just want everything to continue smoothly,” Davis said. “Teamwork is key right now. We’ve had a lot of ball movement and passing. Everything is going well right now.”

The win was vital for the Hawks as a loss could have had major implications in the West Division standings.

“It was a very important game,” said rookie point guard, R.J. Ramirez. “If we were to lose that game, we would’ve went from second to fifth in the standings. But now that we’ve won that game we’ve solidified second place and we’re guaranteed a spot in the playoffs and we have a shot to go 9-0 in the second half of the season.”

With a win by Mohawk College on Jan. 24, the Hamilton-based team overtook the Hawks in the standings, dropping them to third place in the division. However, the Hawks hold a game in hand on the Mountaineers, making the weekend set against Sault College of utmost importance.

Two wins would push them past Mohawk into second place and help them gain ground on the first place Sheridan Bruins who sit at 12-1 heading into the weekend.

“These situations are always tough because you’re playing the same opponent back-to-back,” Collins said. “[It was] the first time we’re playing someone who’s below us in the standings, so it may be a little bit tougher for our guys to maintain their focus and execute at the level we expect of them, so that’s a new challenge for us.”

“We need to keep playing like we’ve been playing,” said Ramirez. “Our last two games (against Fanshawe and Mohawk) have given us some fire for the second half of the season.”