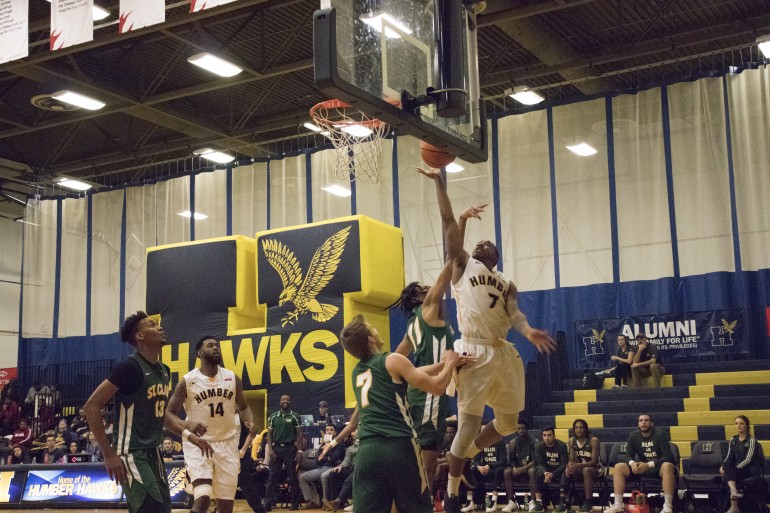 Hawk’s guard DeQuon Cascart drives to the net for a layup against St.Clair. (Mike Furtado )

Bennett scored nine points in the Feb. 17 matchup against the St. Clair Saints to make him the second Hawks player this year to join the 300-point club. Ejim reached the same pinnacle on Feb. 3 against Niagara Knights.

Having two players hit this milestone in the same season hasn’t been done since 1991.

It wasn’t a great offensive night for Ejim against the Saints but Humber’s star player always seems to find a way to contribute to the team’s success. He finished with a season high 12 rebounds in the Hawks’ win, despite having only eight points. Bennett put in nine points.

Even with those quiet performances by the two Hawks’ veterans, their impact on the game is never overlooked by the coaches.

Assistant coach Chad Bewley stressed the importance of both Hawks’ players and said coaching a star like Ejim is something that he will never take for granted.

“He’s an incredible player and I’m very blessed I got to play with him first and now I get to coach him,” he said. “His growth over the years, his dedication, his time in the gym, it shows.”

The Hawks’ finished the season as the third seed in the OCAA West Division, ranked 10th overall, as they prepare for the provincial championships next weekend.

The tournament will be held at Niagara College between March 1 and 3 with the first game beginning at 1 p.m.