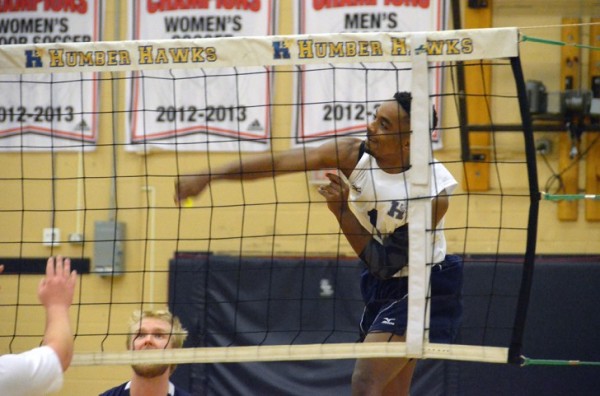 PHOTO BY GEORGE HALIM
Andre Smith spikes one of his team’s 34 kills in the Dec. 1 home win over College Boreal.

Although the Hawks controlled the vast part of their weekend home stand, beating Cambrian 3-1 and Boreal 3-0, head coach Wayne Wilkins said playing against lower tier teams is when his club really needs to step up.

“We get to work on a few of the little things that we don’t normally get a chance to,” Wilkins said. “What tends to happen when you play a weaker opponent is you lower your level of play and our expectation is that we’re going to elevate it.”

Wilkins felt confident that, although his men overmatched the opposition for the entire weekend, it won’t affect them in the long run against top teams.

“You’ve got to find a level of consistency,” he said. “Our expectations and our level of play have nothing to do with what the opponent is going to do. So if you think you’re going to go out there and fool around or whatever, you won’t be out there. That’s the bottom line.”

Mack Robertson, Hawks middle, led the team with eight blocks on the weekend, adding to his season total of 15 – pushing him into the top 20 in the OCAA.

For Robertson, the mindset is simple going into every game.

“Elevate our play, so that we play the same way against the bad teams as we do against the good teams,” he said.

Although the wins were both secured early on in the matches, Robertson said it’s about setting goals throughout the game, and accomplishing them.

Although these were the last games of the semester, the Hawks’ holiday break will be short-lived, as they’ll be heading to Florida to play against top quality teams as a tune up before the season resumes.

“We’re playing quite a few university teams,” said Mark Waldon, outside hitter and middle. “So the caliber of ball is going to be a lot better, so we just have to play consistent and play our game. Don’t overdo anything.”

So what do the Hawks need to do from this point on to keep up the momentum? For Wilkins, the formula is similar to what they’ve been doing all season.

“In order for us to find that consistent play that’s expected from everybody, we’ve got to find our team unity,” Wilkins said. “But also finding that level of consistency that I’m going to preach to the men all the way through.”

The men will head to Florida for just over a week before squaring off once again against Boreal and Cambrian on the road in January.