Women’s volleyball using each game to prepare for Championships 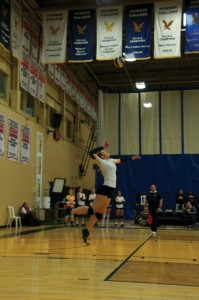 Adela Xrameta prepares to serve during a 3-0 sweep of the visiting Sheridan Bruins. (Ari Salas)

The women’s varsity volleyball team is undefeated through 14 contests this season, after a 3-0 sweep of the Sheridan Bruins on January 22.

“There were a couple of lulls, we let them back into the game a few times,” he said. “There are a lot of people out right now recovering.”

Wilkins said the remaining five regular season games as an opportunity to prepare the team for playoffs.

“It gave me an opportunity to play some people and work on different line-ups for playoffs so I was pleased,” he said.

Even with the undefeated streak, Wilkins expect anything to come easy for the squad.

“It’s going to be a big push,” said Wilkins. “We’re coming into what I call our gravy time when we need to be better than everybody else in those last couple weeks of the season. We’re going to tune up and get ready for playoffs. We’ll be in for a fight this year for sure but we’re going to be ready for it.”

For Taylor Hutchinson the game was a good sign of things to come after several weeks on the bench following a broken finger. In her third year at Humber, and third season with the team, Hutchinson was happy with her performance.

“I did better than I thought I would in my first game back since break,” she said.

Hutchinson shares coach Wilkins’ expectation to win, but also echoed his warning that the championship will not come painlessly.

“The major thing is just consistency,” she said. “I think were doing a great job at overcoming this hiccup, we’re a great group of girls who mesh really well together. Our confidence level builds each other up and that’s all we can do. We create our own atmosphere to pump each other up when it’s really dead out there.”

Wilkins elaborated on the consistency he sees as the team’s biggest difficulty.

“It’s both from an offensive and defensive stance,” he said. “Passing needs to be consistent for our offense to improve,” Wilkins said.

The most important goal is to always work harder than the team on the other side of the net, Wilkins said, but he also expects to bring home gold.