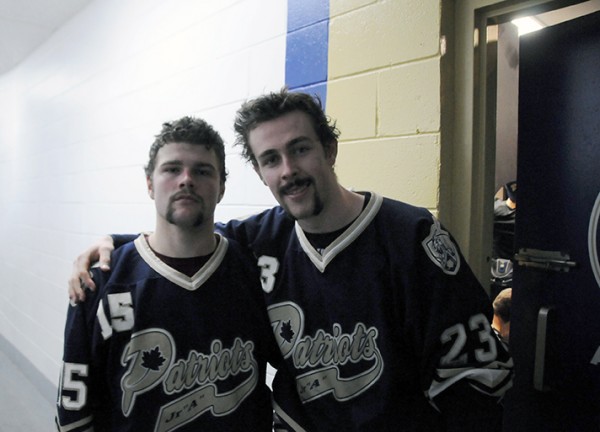 If there’s one thing November is known for, it’s the sudden jump in the number of men with moustaches.

Hockey players are no exception to this rule, as the players from Junior A’s Toronto Lakeshore Patriots and St. Michael’s Buzzers took to the ice at Westwood Arena on Nov. 23, with players on both teams sporting an impressive array of moustaches.

The game was a Patriots fundraiser event for Movember Canada, which raises research support and awareness for prostate cancer and other male health issues. Fifteen players on the team have been fundraising all month long.

For Tyler Currie, a defenceman for the Patriots, this is his second year fundraising for Movember. Last year, he raised over $1,300 alone, and has already beaten that record this year.

“I mention it to a lot of people, and a lot of them are willing to help with the cause,” said Currie. “That’s what the whole event is about, raising awareness.”

Last year, the Patriots received over $3,500 in donations, and this year they were close to reaching that number by press time.

“We’ve already raised over $3,000 this year,” said Jeffrey Bomben, vice president of marketing and hockey operations for the Patriots.

“There’s going to be a silent auction as well, where we plan to sell a signed stick among other things, so with that we’ll hopefully get more donations than we did last year.”

Although the visiting St. Michael’s Buzzers were off to a strong start, scoring the first goal in the second period, the Patriots were eventually able to make a comeback. They scored their final goal in the last few minutes of regulation time to win the game 3-2.

Ahmed Tahir, 22, a first-year general arts and science student at Humber College, said this is his fourth year doing Movember and sees it growing more every year.

“It’s fun to grow a moustache, and it’s important to spread awareness about men’s health, not just in regards to cancer but in general, with things like living healthy and other major concerns.”

The Patriots have done many charitable events in the past, including food drives and raising breast cancer awareness. Next, they’ll be participating in two toy drive games, on Dec. 11 and 14.