Humber Students’ Federation guest speaker Aliya-Jasmine Sovani spoke about International Women’s Day, and her experience as a woman in the media.

Sovani entertained the crowd with insight into her personal life and used anecdotal stories to illustrate her thoughts.
“My mom paid her way through law school by modelling so I think that my definition of a woman would be someone who truly embraces the idea that beauty and brains are not mutually exclusive,” she said. 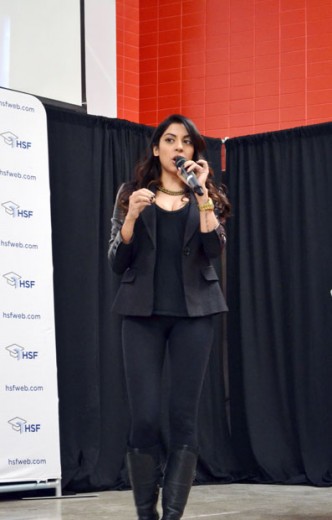 Aliya-Jasmine Sovani, host of MTV’s Play with AJ, spoke about IWD and her experience as a woman in the media. Photo by Cristina Pietrantonio

Sovani, host and producer of MTV’s Play with AJ, made her appearance at the Lakeshore campus cafeteria on March 6 at 12:15 p.m. and the North campus student centre at 2 p.m.

IWD has been observed annually on March 8 since 1913, when women lacked political, economic and social rights.

“For most of history, women and their contributions have been rendered invisible. This is one day to reverse that record and shine a light,” said Dr. Joan Simalchik, program coordinator of women and gender studies at the University of Toronto.

The gender-wage gap is a prime example that while there have been huge strides, inequality remains.  A research publication by the Parliament of Canada from July 2010 revealed women are receiving 76 per cent of what men receive in average full-year, full-time earnings.

“These are legacies from a time when women were anomalies in the formal employment sector,” said Simalchik.
Simalchik, who teaches a number of courses including some on women and social change, said that while the pay gap may be the most obvious display of inequality, rapes and murders continue leaving many women living lives in fear.

“Solidarity between women from every country is key to the emancipation of all,” she said.

Humber’s Centre for Human Rights, Equity & Diversity hosted an information table in the concourse area from 9 a.m. to 3 p.m. on March 7 at the North campus. Human Rights Coordinator Candice Warner-Barrow said the information displayed highlighted the history of International Women’s Day and showcased women who have contributed towards the advancement of women at Humber College, as well as around the world.

Warner-Barrow said the Centre hosts a number of annual events throughout the academic year to ensure diversity and equity are instilled as values at Humber.

“In the past, IWD has been celebrated at Humber College in various ways, which include dinners, lunches, and speaking events, along with an information table to distribute materials and communicate with Humber College’s students and staff,” said Warner-Barrow.

This year, visitors to the kiosk had the chance to win prizes by participating in a free raffle.