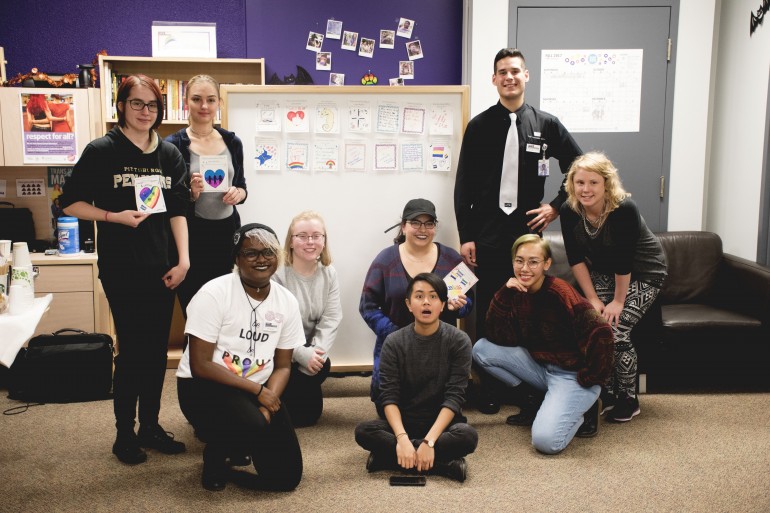 Students celebrated National Coming Out Day at the LGBTQ+ Resource Centre at the North campus on Oct. 11. (Zack McGregor)

Humber’s LGBTQ+ community are sharing their experiences of ‘coming out’  for National Coming Out Day (NCOD).

NCOD helps address issues around acceptance by getting students to embrace themselves and their sexualities in a safe environment.

Humber’s own celebration of NCOD was held at the LGBTQ+ Resource Centre at the North campus on Oct. 11.

“Events like NCOD give students the necessary support they need to come out and identify as a member of the LGBTQ+ community,” said Kenny Dawkins, resource and event assistant at the LGBTQ+ Resource Centre.

“However, the last thing we want to do is force people to come out in an involuntary way,” they said.

People should be comfortable with themselves when they announce something like that, and forcing it upon people is not healthy, Dawkins said.

Even today, people face a double standard with coming out. Fear of ridicule from family and friends is still prevalent.

“Many who personally identify as LGBTQ+ are afraid that if they don’t come out that their own community might disregard [them],” said Dawkins. “Being marginalized by your own community leads to isolation and exclusion.”

“In order to ensure students are not being excluded, we need to educate people on the stereotypes associated with coming out,” said Natalie Elisha, Humber’s student diversity and inclusion and initiatives coordinator.

To help address these issues the LGBTQ+ Resource Centre decided to screen the short film At Home, which explored the stereotypes surrounding the idea of coming out.

The award-winning film was made by local LGBTQ+ filmmaker Dinaly Joyce Trans with help from the Inside Out Film Festival.

“People need to realize that the path and process of coming out are different,” Trans said. Trans hopes the film will highlight the stereotypes associated with coming out and how they have an impact on culture, family and belonging.

“There is a long-standing assumption that everyone is straight till they say otherwise,” Trans said. “Until this changes, the notion of coming out will remain a big deal or a necessity for members of the LGBTQ+ community.”

The idea that coming out should be a choice not a necessity is changing the way NCOD is celebrated.

The Humber LGBTQ+ Centre is committed to giving students the necessary support they need to feel safe and accepted.

In the future, the centre will hold workshops for both students and faculty so they can better understand how to be supportive members of the LGBTQ+ community.