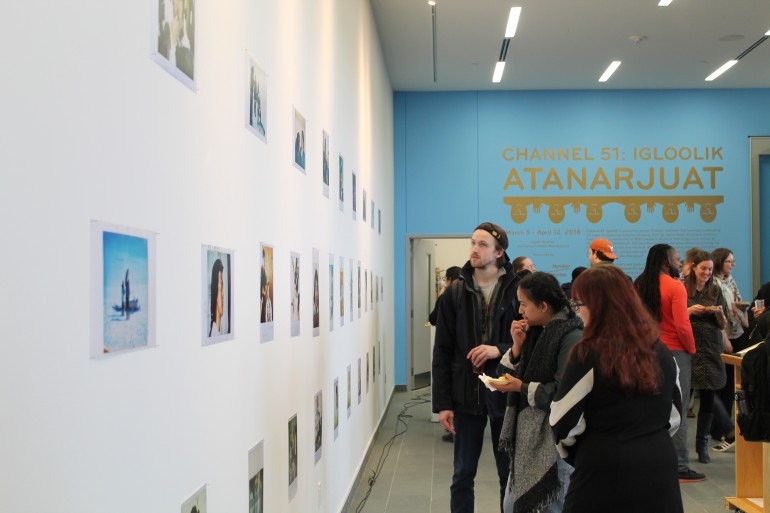 A number of students and community guest came out to the opening reception of the Channel 51: Atanarjuat Exhibition at Humber’s North Space Gallery. (Olivia Levesque)

Retrospective photos from the renowned 2001 Inuit film, Atanarjuat: The Fast Runner, were presented at Humber North for the first time ever during an opening reception on Thursday.

The exhibition, Channel 51: Igloolik, is a celebration of 30 years of Igloolik Inuit film from the Isuma and Arnait Video Collectives. Two exhibitions are being shown at both Humber’s North and Lakeshore campuses.

The objective of the exhibitions is to honour the work that has come from Igloolik, a remote community of 1,600 people in Nunavut.

Humber Gallery guest curator Asinnajaq, also known as Isabella Weetaluktuk, came to Humber North to commemorate the opening of the Atanarjuat exhibition, part of the Channel 51: Igloolik Series. Her role was to curate the numerous polaroid pictures now shown in the exhibition from Isuma Productions.

“The film is the first international success of an Inuit made film,” Asinnajaq said. “It was a story passed on through generations about Atanarjuat in the Igloolik region, and it’s the first film script for a feature film ever written in language, with an all-Inuit cast.”

The Igloolik encompasses northern Baffin Island and a section of mainland Nunavut.

The behind-the-scenes Polaroids include casting photos, and some taken to document costume and makeup design. Others are vaguely captioned in pen, documenting fun being had by cast and crew.

Asinnajaq shared that one of the most interesting of the collection shows a mechanical walrus head that never made it into the film. She said it was supposed to be used in a scene that showed a walrus attack, but it was ultimately cut out of the film.

Asinnajaq worked closely with the Aboriginal Resource Centre at Humber in hopes of engaging in a greater conversation about the importance of Indigenous art.

“For indigenous communities, the conversation is about resurgence,” Aboriginal Resource Centre manager Regina Hartwick said. “It’s about rebuilding our communities, it’s about restoring our language, and it’s about living our lives in the beautiful way that it’s meant.”

Many students were in attendance at the opening reception, including a second-year class of Visual and Digital Arts students from Humber’s Lakeshore campus.

Elizabeth Shearer said her class came to the opening in search of inspiration for its upcoming gallery exhibition project.

“I like the interactive portion of it, I feel like I’m looking at a corkboard documentation of the film. It’s intimate,” Shearer said.

Danica Evering, the Education Officer at Humber Galleries, worked with Asinnajaq to create an interactive component of the exhibition.

“One of the themes (of the exhibition) is about thinking where you come from, so we are encouraging people to take a Polaroid picture of themselves and then write on the bottom of it saying what makes you who you are,” Evering said. “Or what you’re thinking about right now, because Isuma in Inuit means to think.”