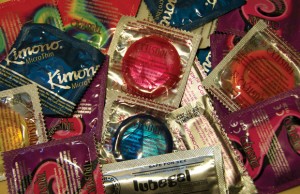 A variety of different condoms

Thirty-seven per cent of sexually active young adults in Canada between ages 20 and 24 -are not using condoms, according to Statistics Canada, to the concern of health workers and others who counsel on sex.

“The highest reported STI across our nation is chlamydia. We also have gonorrhea and syphilis, and unfortunately, HIV,” she said.

“There is also more and more infection transmission through oral sex,” said Lorraine Hewitt, store spokesperson at the Good For Her feminist sex shop in downtown Toronto.

Herpes, HPV, chlamydia and gonorrhea can all infect your throat, Hewitt said.

“Condoms these days are great, and they should not decrease your pleasure when used correctly,” said McKee.

The most popular condoms at Good For Her, on Harbord Street near the University of Toronto, are Japanese latex brands such as Kimono and Beyond Seven, said Hewitt.

“They meet all the same safety standard as thicker condoms do. It’s just a thinner technology,” she said.

“It feels like they’re not even there,” said Robin Young, a second-year public relations student at Humber, and Kimono enthusiast.

For those with a sensitivity to latex, or don’t enjoy the rubbery feel, there are condoms made from polyisoprene, which have a softer stretchier feel, said Hewitt.

“There’s an idea that it may feel a little more natural,” she said.

Good For Her also carries lambskin condoms made from sheep intestines, said Hewitt.

“Since they’re made from a natural membrane they feel very much like there’s nothing there,” she said.

She added it’s important to get the right fit when choosing a condom that will keep sex safe and pleasurable.

“It shouldn’t feel overly restrictive and it should be should be able to roll down to the base of the penis,” she said.

Finally, using lubricant with a condom is the key to increasing pleasure and decreasing the risk of the condom breaking, said McKee.

Condoms and lubricant are free at Health Centre locations at Humber North and Lakeshore campuses.

The Health Centres are located at A107 at North Campus and H206 at Lakeshore.