No medal for women’s volleyball at CCAA despite “best performance” 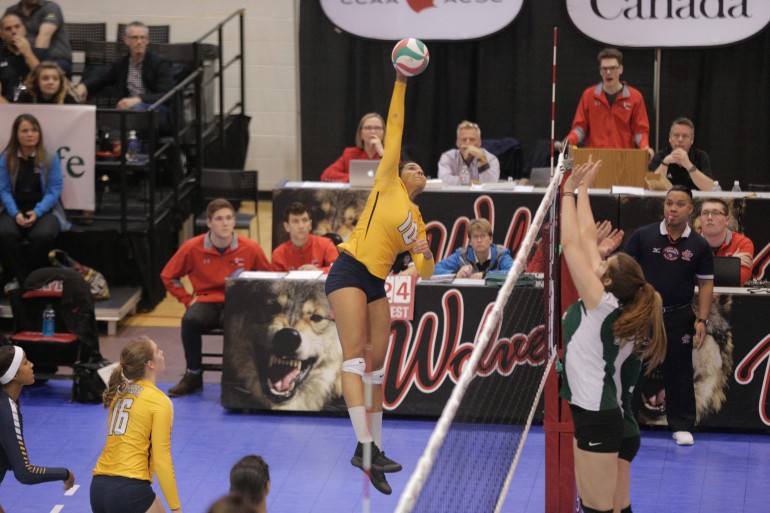 Breanna Golding (No. 10) leaps into the air for a kill in the Hawks’ national quarterfinal matchup against Garneau last Thursday. (Randy Vanderveen)

Though they put on a great performance, the Humber Hawks women’s volleyball team is returning home from Nationals without any medals in hand.

The Hawks advanced to the bronze medal game at the 2018 CCAA National Champions in Grande Prairie, Alta. last week but were defeated by the Lakeland Rustlers in three sets. 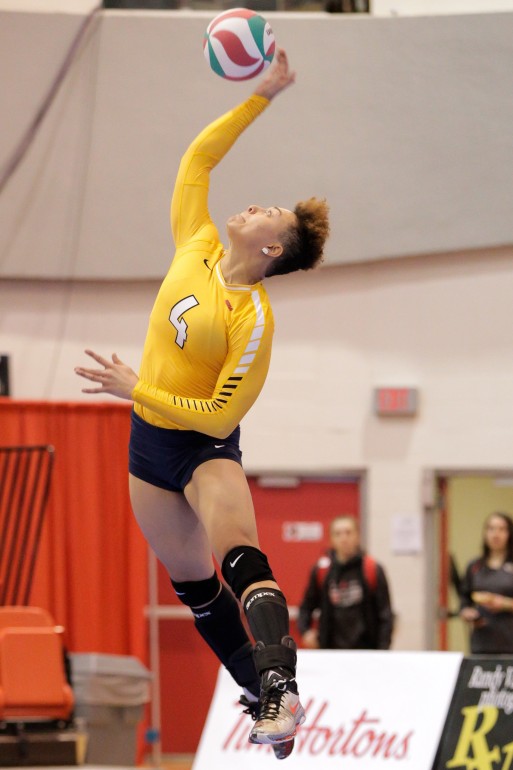 Jasmine Lougheed (No. 4) leaps into the air for a serve during the Hawks’ bronze semi-final matchup against the MSVU Mystics on Saturday. (Randy Vanderveen)

The women’s team put on a good showing to start the tournament, defeating CCAA regulars Élans de Garneau in the quarterfinals. The Hawks then faced the number one ranked Douglas Royals in the semi-finals, falling in four closely fought sets.

The Hawks lost a key player to injury in the semi-final game, libero Kyla Wilkins. While they overcame this by sweeping the Mount Saint Vincent Mystics in a bronze playoff match, they felt the lack of their libero’s presence against Lakeland.

“We played hard all weekend,” women’s volleyball coach Chris Wilkins said. “We had some unfortunate injuries that really hurt us after the semi-final.

“It didn’t allow us to then perform at our best,” he said.

Going 2-2 at Nationals this year, the Hawks’ finished fourth out of the eight teams playing in the championships. Their showing was an improvement over last year, where the team finished eighth, going 0-3 in their matches.

“The girls played so hard and I’m extremely proud of all of their accomplishments,” Wilkins said. “The willingness to fight with this group was amazing to watch this year.”

Hawks player Brynne Spence-Coleman had similar feelings about how the team played at Nationals this year.

“The team’s performance these nationals, although we didn’t achieve our end goal, was the best I have seen yet,” she said. “Even when we lost or weren’t playing to our standard we worked together to enjoy ourselves and have fun playing the sport we love.”

The Hawks have medalled once on the national level, earning a bronze medal at the 2016 CCAA championships.

With the National championships over, the Hawks’ season is officially over, with the team now looking ahead to next year.

The Hawks will lose several key players next season, including Spence-Coleman and Devan O’Connor, both among the team’s leaders in points and kills.

Wilkins remains optimistic about the team’s future even with these personnel losses.

“The reputation we’ve built over the years, we’re bringing in key recruits,” he said. “Before there was Brynne, there was somebody else, and after that there will be somebody else.”

“That’s the point of building a strong program. Year after year, you’re going to be able to continue to build on top of that,” he said.

Spence-Coleman is confident the team’s dominance in the OCAA, where they have racked up seven straight undefeated seasons and eleven consecutive provincial championships, will continue without her.

“Humber’s work ethic right from pre-season is unmatched and continues to be a great team dynamic,” she said. “I know this legacy will continue and they will continue to make all the Humber alumni proud.”