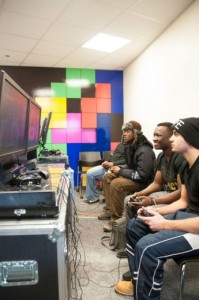 Humber students unwind in KX203 where HSF has created a video game room to match a facility at Lakeshore campus. Photo by Kathleen Jolly

Humber’s North campus has finally caught up with Lakeshore in the video game department.

Humber North is now home to a new video games room equipped with Xbox Ones, located in KX203.

“We had the video games at Lakeshore last year as part of their games room,” said Humber Students’ Federation services coordinator Kimberly Daniels. “It went over really well at Lakeshore, so we thought we’d introduce it here at the North campus this year.”

The games room, which opened on Jan. 13, has been in the works since last summer.

“I oversee the games room, it’s my staff in there taking care of it, but this really was a project that our VPs worked on over the summer to kind of get it introduced here at the North campus,” said Daniels.

To set up the room, HSF partnered with We Got Game!, a Toronto-based interactive game centre that hosts Xbox video game events with different schools and clubs.

“(We Got Game!) comes a few times a semester and they do gaming tournaments,” said Daniels.

The room has colourful wall blocks reminiscent of Tetris pieces, and features eight Xbox Ones and monitors, as well as an array of seats, from chairs to bean bags.

“It’s free play for students,” said Daniels. “You go into our gaming room, you have to leave behind your student card or a piece of ID to sign up to use the equipment, and you get half an hour of free play.”

Daniels said student reception has been strong: “There’s tons of students in there all the time.”

“The game room has been well received by students, and we couldn’t be happier putting a space to use that was otherwise left empty,” said Timothy Brilhante, HSF president.

Gayle is one of the regulars, playing every Monday and Wednesday usually from noon to 2 p.m.

Asked what his favourite game is, Gayle cited the popular first-person shooter Call of Duty: Ghosts.