Nothing but net for Hawks against rival Bruins 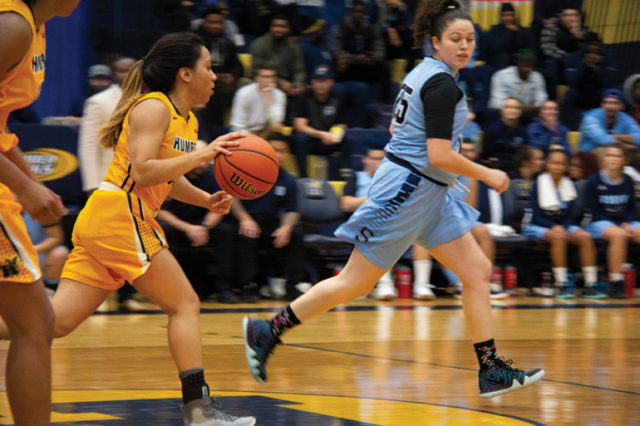 Humber Hawks women’s basketball team has Leticia Lopez pushing the ball over half court looking to set up a fast break. (Paige McGowan)

After starting the year with a few injuries, dropping their first game and losing the athleticism of last year’s Hall of Famers Ceejay Nofuente and Aleena Domingo, things seem to be looking up for the Hawks.

Last Wednesday, the unranked women bested their GTA rivals Sheridan Bruins, 10th overall in the country, 71-56. The athletic centre was at capacity for these teams’ 120th meeting and it was a night of celebration for both the men’s and women’s teams as they both came out victorious.

“This team is only getting better every day,” Hamaoui said of the women’s squad. “Every day in practice we see improvements.

“Right now we went in unranked and we just took down the number 10 in the country,” she said after the game. “There’s tonnes of potential on this team.”

“The girls are fighting, they believe, we believe, I think we are going to do great things,” Hamaoui said.

To her point, the women are now enjoying a four-game win streak, beating Mohawk Mountaineers 80-64 on Saturday.

The women’s game was a see-saw contest through the first three quarters and with strong defence, but in the fourth the Hawks managed to hold Sheridan to its worst offensive frame of the year, allowing only eight points in the quarter.

“We been practicing our defence a lot in practice,” said women’s coach Ajay Sharma. “Being at the right spots and not gambling too much. The girls did a good job in executing tonight.”

Top scorer Miea Campbell-Johnson finished the game with a double-double, a high of 20 points and 14 rebounds.

“We’re happy about the win overall, we do feel that we could have done a better job throughout the game. We played well in the last four minutes,” Hamaoui said.

The fans were hungry for more. The atmosphere in the gym gave off the essence of a playoff game. The men’s team provided winning a hard-fought battle with a final score of 81-78.

Continuing the hot start to their 2018-19 season, the eighth-ranked Hawks saw their record improve to 5-0 with this win.

The men’s Sheridan Bruins fell to a 3-2 record.

The high levels of intensity and athleticism between these two rivals are the reason this match-up is a must-see each year.

“I woke up pretty excited today,” said team captain DeQuon Cascart prior to the game. “Everyone knows that Humber versus Sheridan is a big game. The guys are excited, the coaches are excited, and it’s going to be fun out there.”

The men’s team dominated in the first quarter with a 22-12 lead.

Things heated up in the second quarter after a hard foul by Cascart resulted in a technical foul allowing the Bruins to bring the gap in score down to single digits.

Shortly after, rookie guard Kevin Otoo had a breakaway that ended in a monstrous two-handed slam dunk that got the Humber crowd cheering and on their feet.

Anticipation in the gym was high as the Hawks went into halftime with a 37-34 lead.

The Bruins made an impressive comeback after halftime and took the lead.

Their lead was short-lived as Otoo made a clutch three-pointer to tie the game at 60, and the fans responded, erupting with a cheer.

“This game is a really big deal because it brings out a lot of fans and a lot of alumni,” said fan Dylan Walters. “The rivalry is very historic.”

The last minutes of the game were intense, both teams played extremely well, but only one can claim the win.

Top scorer was second-year point guard Fowzi Mohamoud finished the game with 19 points and just points behind was fourth-year forward Jaylan Morgan with 18 and fifth-year guard Curwin Elvis with 17.

“There was a lot of team basketball and it was just a good game overall,” said Zach Marcelline, a third-year guard.

“You have to make free throws and big shots in big games, especially down the stretch,” said Sheridan men’s coach Jim Flack. “We didn’t, they did.”