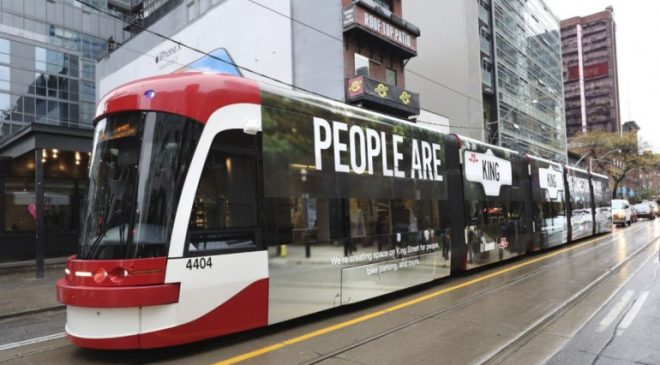 The only problem is the city’s own research contradicts the narrative that these businesses are struggling at all.

Toronto’s new ‘Food is King’ promotion intends to drive more foot traffic towards 40 restaurants along King Street that have been affected by the transit pilot project between Bathurst and Jarvis Streets. Diners can receive $15 towards a meal at any of those 40 restaurants using the food-order app, Ritual. This new promotion will reportedly commit the city to a cost around $80,000.

According to mayor John Tory, this is to ensure the project is a success for everyone impacted by the transit project and to encourage Torontonians to use the new pedestrian-friendly area. But it seems like this promotion is really more intended to placate irate restaurateurs.

The King Street Transit Pilot restricts private vehicle access, prioritizing streetcar service instead, which business owners argue has cost them significant business. In one instance, Kit Kat Italian Bar and Grill Owner Al Carbone went so far as to say his restaurant has suffered nearly 50 per cent of revenue losses since the project went into effect in November.

Minor protests on King from upraised middle fingers sculpted in ice to road hockey games highlighting the lack of traffic have brought negative press to the pilot. But the data the city’s collected doesn’t back up any claims about decreased business.

Figures collected by Moneris Solutions and released by the city as part of their ongoing analysis of the King Street pilot’s success shows that customer spending in the first three months of this project is in line with seasonal spending patterns on King Street in the past three years. No concrete evidence has been brought forward to back up these merchants’ complaints or justify this promotion’s price tag.

Toronto’s updated analysis of the pilot as of January shows the value of customer spending in the pilot area increased 21 per cent from October to December, which was in line with the seasonal growth of 20 per cent across the city. During the same time period, growth in the comparison area surrounding King remained even.

A boost from the city would be a generous move to help keep King Street vibrant and profitable. But if the city wants to commit $80,000 to improving business sales, there should be more proof of a need for this funding to justify the move to Toronto taxpayers. Otherwise, the money would undoubtedly be better spent somewhere else.

When the price tag is as high as the new ‘Food is King’ promotion, the city has a responsibility to show taxpayers why so much money is seemingly being spent unnecessarily to keep an already busy sector of the city just as busy.

If any part of the city is feeling overlooked and under-appreciated, it should take more than road hockey and crude ice sculptures to convince the city they need more support.