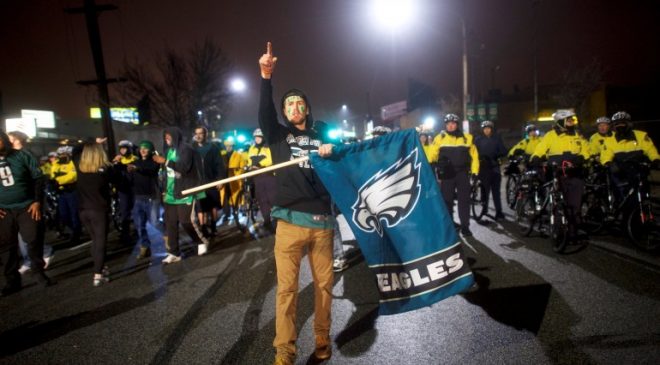 Philadelphia was on fire last Sunday, literally, as crowds filled the streets to celebrate the Philadelphia Eagle’s first Superbowl win over the reigning champions, the New England Patriots.

Thousands marched along the city’s coveted Broad Street, not letting anything get in the way of their celebrations.
Police were reporting people were climbing up light poles, cars were being flipped over and stores were being ransacked.

We saw a similar scene on our TV screens almost three years ago in Baltimore after the death of Freddie Grey, where at least 34 people were arrested during the 2015 riots.

Last week’s riot was considered a time of joy and happiness after the Eagle’s beat the almost unstoppable Tom Brady and the gang, while the 2015 riots were a time of grief and protest among America’s black community.

Two completely different events that led to the exact same result, the downtown core of their cities being destroyed.

If you remember the 2015 riots, it was mayhem. Local businesses were being burnt to the ground and police cars were being torched. The destruction by emotional crowds flooding the streets led to a city-wide curfew.

Tear gas was being tossed into the crowds, one after another being arrested and protesters crying in grief over the death of the young Baltimore man.

While in Philadelphia last week social media was filled with compliments and egging on of the havoc. If you clicked on ‘#Philadelphia’ on Twitter, photos and videos of street signs being ripped down and crowds chanting “Tom Brady sucks.”

Feeds from the city’s local media outlets also were all over the internet, with reporters even edging on the celebrations.

Newsweek reported that instead of tear gas being brought out in Philadelphia, the police were using the tactic of yelling “everyone go home.”

I’m sure the protesters of Baltimore would have loved a “‘please go home” instead of getting sprayed in the face with tear gas, which could cause permanent eyesight problems, and face off against the National Guard.

I will never understand why people who are so proud of winning one of the biggest titles in pro sports would try to burn their winning city to the ground.

Thinking back to Vancouver riots in 2011, when the Canucks lost in Game Seven against the Boston Bruins after having a lead in the series, people were emotional.

Even though the riot was unnecessary, it was more understandable than a winning team destroying their own city.

At the end of the day the Philadelphia Eagles are still the 2018 Super Bowl champions, and I’m sure the people apart of that riot will be telling their grandchildren about it in 30 years.

But at the end of the day is it really worth it? In Baltimore, they were rioting for justice, while in Philadelphia, they were celebrating a Super Bowl win.

These people rioted for two completely different reasons, and they were both treated differently, but both downtown cores were wrecked in the process.

My only question is, was it worth it Philadelphia?