The bargaining table is the only thing standing between Humber College and the picket lines.

According to a Sept. 21 OPSEU press release, the bargaining team for the colleges’ 12,000 faculty asked the conciliator to issue a “no-board” report, putting the parties in a legal strike or lockout position in mid-October.

The union says the no-board request was made to kick start “real negotiations.” It hasn’t set a strike date, and a five-day notice of either strike action or a lockout is required.

The request follows a Sept. 14 strike vote where faculty at 24 Ontario colleges voted in favour of giving the bargaining team a strike mandate. The union said 68 per cent majority approved across the province, with Humber’s faculty voting 67 per cent in favour. Faculty includes all professors, instructors, counsellors and librarians in the province.

“A lot of our demands, they won’t even discuss right now at the table,” Humber faculty Pearline Lung said.

The council tabled an offer to extend the existing contract for four years, with a pay increase. 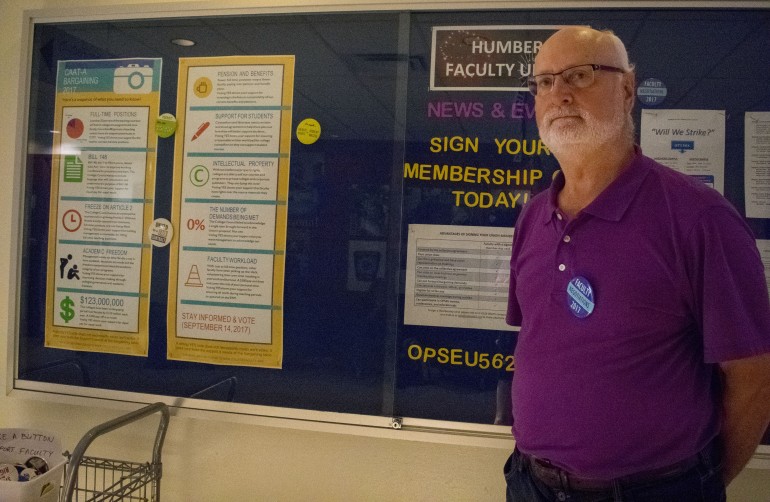 Humber President Chris Whitaker said contingency plans are being developed, but they won’t be publicized unless a strike takes place.

“We’ve had very few strikes in our history but they always take a strike vote in bargaining,” he said of OPSEU.

An update appeared on the Humber website with information regarding the OPSEU negotiations, including an assurance that no student had ever lost a year of school because of a strike.

Whitaker worked at St. Lawrence College in 2006 when the last strike occurred. He said the strike lasted 18 days, and the semester was extended to let students make up for learning that was missed.

No student was “short-changed” any of their learning outcomes during the strike, he said.

Humber Union President Robert Bolf was on the picket lines during the 2006 strike and he said the main bargaining point then was “the quality of education.”

He said this has worsened since 2006.

“We don’t feel students are getting the value for what they’re paying for,” Bolf said.

The OPSEU bargaining team is negotiating for, among other things, academic freedom: faculty having more authority in how classes are taught and how students are evaluated.

Bolf said academic freedom is key to ensuring students get the education they’re paying for.

“Faculty are subject matter experts with experience, yet faculty aren’t able to decide what goes into a course…, from our perspective that’s just not right,” he said.

Conversely, Whitaker said, “faculty have a lot of freedom in how they teach the curriculum.”

Unlike universities, Whitaker said, “Colleges have program standards which are approved and set by the Ministry…that we have to follow.”

The parties are also negotiating monetary issues, with the government currently offering a 7.5 per cent pay increase over four years, with the union aiming to improve benefits for contract workers.

Bolf estimates 75 per cent of Humber faculty are currently on contract, either as part-time or partial load instructors.

“Contract faculty don’t know from term-to-term whether they will be employed, so it’s highly stressful, there’s no guarantee of reemployment and they only get paid for teaching hours,” he said.

“At one point we need to make a stand…as uncomfortable as this is for everybody,” Bolf said.

Violence against women an ongoing problem, from Polytechnique to the van attack