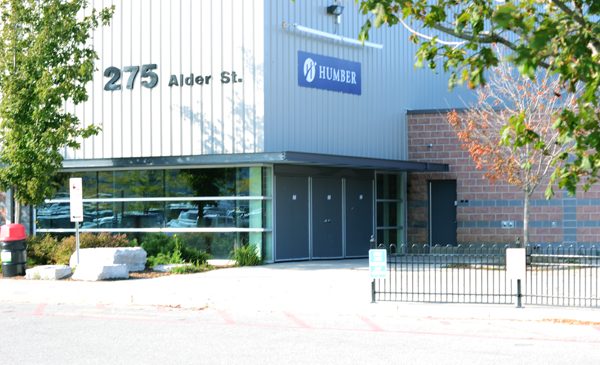 Humber College has renewed the lease for its Orangeville Campus at 275 Alder St. It offers six programs. (Courtesy Humber.ca)

Humber College announced this month it is staying in Orangeville with the renewal of its campus lease.

The campus located on the second floor of the Alder Recreation Complex will see Humber students walk the halls for at least three more years and Campus Director Joe Andrews says some changes can be expected.

“The (2016-2017) research synopsis and academic plan for Humber Orangeville addressed the need for areas that Humber has not been committed to in the past,” he said. “These areas include agribusiness, further expansion in police and law enforcement programs, and a form of Indigenous studies.”

Currently the Police Foundations program is one of six programs offered at Orangeville. Andrews said there is a need for expansion in the program at the Lakeshore campus, and Orangeville is willing to accommodate. Its current offerings include design foundation, social work, early childhood education, and some transfer programs for general arts and science.

Andrews said moving forward the commitment is not only to fulfil Humber’s academic pillar of being involved in the community, but it also serves to expand Humber within reason.

However, the Orangeville campus is not just a spillover campus for Humber, but rather offers students an alternative learning location, apart from the large North and Lakeshore campuses.

“We are defined more as an access campus, meaning that it is somewhat of a starting point for people from the community to pursue further academic education,” Andrews said.

“Some people feel a smaller community ends up presenting some hurdles of inaccessibility.”

The Orangeville campus is described to be an easier starting place for students who don’t feel comfortable in the larger campuses.

Sam Sharkey, a first-year early childhood education student at the campus, said the location works for her because of its size.

“With an anxiety disorder, it has allowed me to go to college with confidence that I know I wouldn’t have at a large campus,” Sharkey said.

“For my program, we have all our classes together which makes it easy to ask each other questions and work together.”