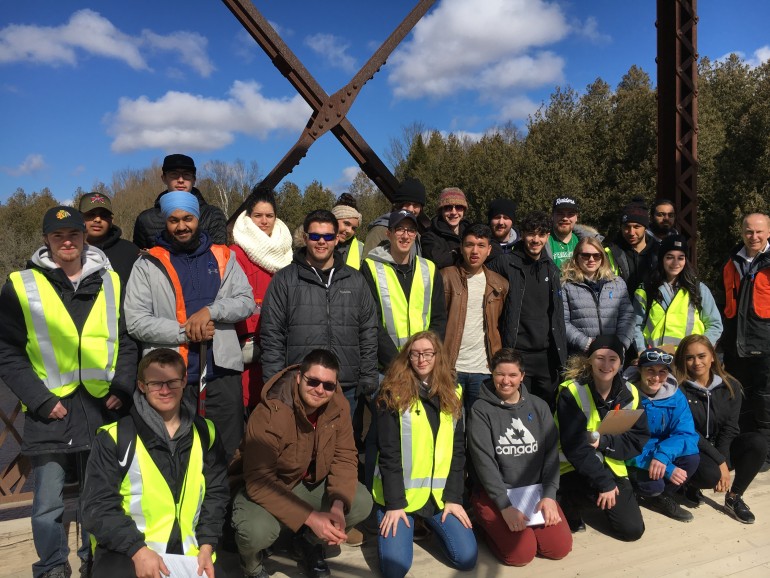 Students of Orangeville Campus Police Foundations program pose after the search for Kaden Young on Monday.

The toddler has been missing since Feb. 21 when he was swept away from by the fast-moving Grand River, just west of Orangeville.

The van the young boy and his mother was travelling was swept up by the rising waters caused by warm temperatures, melting snow and heavy rains. The lad and his mom tried to walk away from their stalled van but the water pulled him out of his mother’s arms, police reported.

Joseph Bullock, a second-year Police Foundations student and a member of the Student Association at Humber Orangeville, assisted in organizing the search, along with instructor Amanda Crognale and Campus Director Joe Andrews.

“Unfortunately, Kaden still hasn’t been found yet, but the search is definitely still going strong,” Bullock said. “The longer it goes on, the fewer unsearched places there are that he could be so in that regard the search is certainly serving its purpose.”

Ontario Provincial Police reported that hundreds of volunteers aided in the search. Connor Maclean, a first-year Police Foundations student, was humbled by the commitment of the volunteers, and the actions of his own peers.

“The class and the school had been hearing about the search for Kaden, and I think it got to a point of the hopelessness of how this boy (hasn’t been) found,” MacLean said.

He said that’s when Andrews and Crognale wanted to know a rough idea of how many students would be willing to conduct a search for the boy on behalf of the Police Foundations program and the college.

As students helped in the search for the child with other volunteers, the experience also served as a learning exercise for the students who were involved.

“It’s one thing to discuss the abstracts in a classroom but it is quite a sobering act to go out and be searching for the remains of a young boy,” Bullock said. “I definitely learned an appreciation for how dangerous nature can be and about the scope and size of an operation such as this.”

IGNITE talks with Humber and UGH regarding mandatory student fees