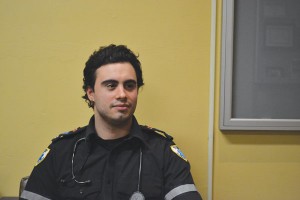 Only 17 students across the country are battling for $30,000 worth of provincial and national scholarships from an Ontario-based charity.

The Tema Conter Memorial Trust scholarships are awarded to those producing a winning research essay about post-traumatic stress disorder and aimed at students in emergency services programs. Students in police foundations, criminal justice, pre-service fire education and training, emergency communications, and paramedic programs at Humber College are eligible to apply.

“We haven’t received any submissions from the police foundations program or from the criminal justice program,” said Vince Savoia, executive director of the Tema Conter Memorial Trust.

The logic behind the task is to raise awareness and educate students seeking a career in emergency services because PTSD is a possible hazard for any jobs within the field.

“When you have the signs and symptoms yourself, oftentimes you don’t recognize it,” she said.

The Tema Conter Memorial Trust is dedicated to help people in emergency and military services who experience tragic events on a daily basis. The organization began as a charity offering scholarships to paramedic students and has evolved into a centre for research, education and training, and peer and psychological support.

Gray, who is involved with the trust, said she likes to inform the first-year paramedic students about the scholarship during their first semester.

“So if they feel like it’s too much time-commitment to write the essay while they’re in their first semester, at least they know that that opportunity is there for next year,” she said.

The charity offers one $2,500 scholarship per province, with Ontario receiving two scholarships due to the large number of colleges in the province. The best research paper in the country also receives an additional $2,500.

The majority of the charity’s scholarship applicants are in Humber’s paramedic program, although the contest is open Canada-wide to all emergency services and military students.

Savoia, who graduated from Humber’s paramedic and criminal justice programs, said although he is keeping the criteria of the research paper as is, he is also considering creating an additional, smaller scholarship which includes multimedia in order to get more students involved.

Gabriel Maltese, a second-year paramedic student at Humber College, plans to apply for the trust’s 2014 scholarship, which routinely closes on Dec. 31 of each year.

“People who work in emergency services are very susceptible to PTSD,” said Maltese. “All it really takes is one event to cause that in someone.”

Henri Berube, Humber’s police foundations program coordinator and former Peel Region media relations officer, said, it is important to educate students about issues in their future careers before they seek experience in the workforce.

“You sensitize into the fact that they may run into a culture that still exists that says you’re not supposed to go for help, and that’s a dangerous culture,” said Berube.

Maltese said the stigma exists because there is a lack of awareness.

“The only real way to kind of break that is educating people as much as possible,” he said.

Savoia created the charity during his own struggle with PTSD after attending a homicide while working as a paramedic. He lectures Humber’s paramedic students every year on signs, symptoms and when to seek help.

Maltese said he was fortunate enough to hear Savoia talk in 2013.

“The one thing I’ve learned, is it’s okay for you to feel these things,” he said.

Nine Humber students have received provincial scholarships, three of whom also received national scholarships from the charity since its launch in 2001.