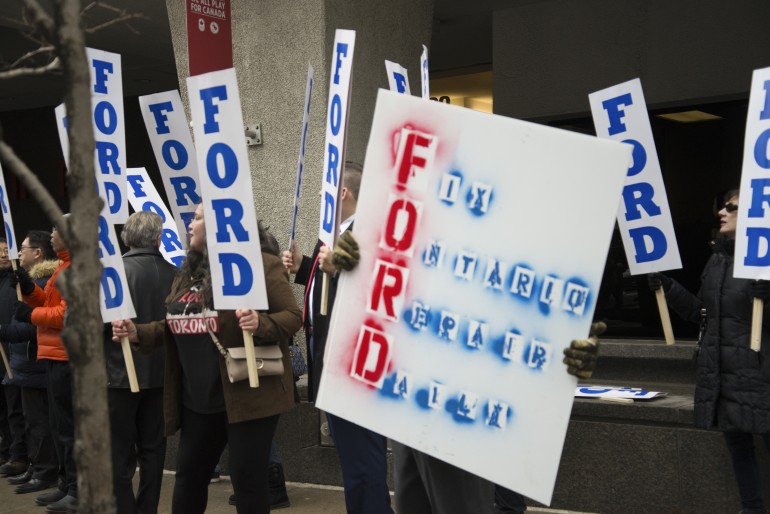 Tanya Granic Allen, president of Parents as First Educators, kept raising the issue of sexual education in elementary schools at the first PC debate at the TVO studios in Toronto on Feb. 15. It was her main issue, which she made obvious at the start.

“What we’ve seen happen time and time again after each election that we’ve lost is that leaders are not listening to the grassroots,” Granic Allen said.

She and four others — former leader Patrick Brown, former Toronto councilor Doug Ford, former MPP Christine Elliott, and MPP candidate Caroline Mulroney — are vying for the leadership of the Progressive Conservatives in Ontario.

The position became open when allegations of sexual misconduct were made against Brown by two women, claims that have not been tested in court.

Granic Allen said the grassroots is made up of people who don’t agree with Kathleen Wynne’s sex education “agenda.” She also advocated for parental consultation, which would allow parents to have a say in what is included in sex education curriculums.

Granic Allen said as leader she would review the entire curriculum line by line, and introduce sex education that “doesn’t sexualize children and the parents are OK with.”

Ford agreed with her. He said people are sick and tired of this “ideology.” He stressed the Liberals did not consult with the parents or teachers when creating the curriculum.

“I believe in educating your kids at home first,” Ford said.

Elliot, campaigning for party leadership for the third time, said parents were consulted but not adequately. She said a sex education curriculum is needed in Ontario, but she would consider age-appropriateness.

“Maybe something children are learning in Grade Two now they should learn in grade eight or nine or 10,” Elliott said.

Mulroney, financial analyst and daughter of former Prime Minister Brian Mulroney, said the curriculum was created mostly with bureaucrats and not with parents.

Their message didn’t resonate with Humber Lakeshore student Matty Alburger, who is active in the school’s LGBTQ community.

He said Ontario students need an “open-minded” curriculum like the current one because it would “instill a healthier idea of sex later in life.”

“I think that [parental consultation] would push conversations back more because not every parent is liberal and open-minded,” said Alburger, who is in his third year of creative advertising.

A second leadership debate is scheduled for Feb. 28 in Ottawa.