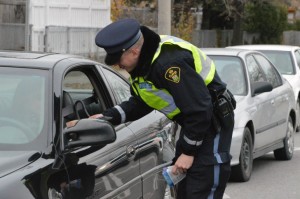 The police will be on the lookout for drivers impaired by drugs as well as alcohol during the Reduce Impaired Driving Everywhere program checks this year.

“The stats are telling us that there is an increase of illegal substance taking and driving,” deputy chief Mark Saunders of the Toronto Police Service told a crowd at this year’s R.I.D.E. Check Launch at Humber on Nov. 21.

“We have highly trained officers who are able to detect those people that are operating a motor vehicle under the influence of drugs,” said Saunders.

The launch was held at Humber College’s North campus and immediately followed by a R.I.D.E. check on Humber College Boulevard. Police officers from all across the province were present at the event aimed at educating people about the dangers of drinking and driving.

Driving drunk not only endangers others on the road, it can hurt your pocketbook as well, said Staff Sgt. Robb Knapper of the Toronto Police Traffic Services. Violators can rack up about $20,000 when all is said and done, he said.

“This is criminal court, this isn’t minor traffic stuff. This is the loss of your employment possibly, lawyers’ fees, minimum suspension of your license for three months, just to start, and that’s before you’re even convicted,” said Knapper. “If you hurt someone in the crash, you can spend some time in jail.”

The penalty for driving while under the influence of an illegal substance is the same, said Knapper.

“If we make a determination that you have consumed drugs and your ability to operate that motor vehicle is impaired, you still get arrested,” Knapper said.

Once the police determine that someone’s driving is impaired by drugs, they draw blood or take a urine sample for testing by the Centre of Forensic Sciences, said Knapper.

The problem is that, unlike the Breathalyzer, blood and urine tests are invasive and awkward to carry out in the field, and the results are not immediately available.

“It becomes a subjective test and subjective tests are easy to challenge in court,” said Bernie Monette, coordinator of the web development program at Humber.

Before coming to Humber, Monette worked for the Addiction Research Foundation at the Centre for Addiction and Mental Health. While there he taught a course called Back On Track for people who had been convicted of drinking and driving.

“People don’t understand how alcohol works,” said Monette. “They experience being drunk as a subjective thing . . . if they don’t feel that they’re drunk, then they’re not drunk.” But once someone blows into a breathalyzer and the blood alcohol level is shown to be above 0.8 per cent, the law says they’re drunk, no matter how sober they feel, said Monette.

“The great thing about the Breathalyzer is it’s objective, it’s scientific, it’s yes or no,” Monette said. No such device exists yet to test for drugs in the field, he said. “If you’re on marijuana or any other drug, the most they could probably get you on is possession.”

Whether it’s drugs or alcohol, any substance that impairs your judgment and slows your response time negatively affects your ability to drive, Monette said.

“Driving is the most dangerous thing that we do, when you think about it,” said Monette. “We’re sitting in a one-ton vehicle going at a high rate of speed and we’re negotiating turns and we’re passing other cars. You have to be on your game.”