The Graphic Design Portfolio Show gave third-year students exposure to the industry while having an epic time with their graduating classmates.

The venue was filled with eager guests who browsed through portfolio booklets.

The show promoted students’ skills to the industry in order to obtain an internship or launch a career, said Program Coordinator Kevin Brandon.

The portfolio show allowed this year’s graduating students to present their work not only to the industry but also to each other, their families and their friends, he said.

It is a culmination of their best work from the third-year Graphic Design advanced diploma program, Brandon said.

The April 15 event at The Spoke Club, located at 600 King St. in Toronto, offered accessibility to industry guests who were able to attend the show after work, said Brandon.

“It’s also an exclusive members club which adds some exclusivity to the event,” he said.

Olivia Sanders and Mary Friedt are two graduating students that promoted their work at the show.

Sanders has always been interested in the arts and has family members with a design background, she said.

When creating her portfolio she wanted to appeal to professionals in the industry while reflecting her personality, Sander said.

“I’m really inspired by social media and travelling. It’s really interesting to see what other people upload from all over the world,” she said.

Friedt also gets inspiration from social media and advertisements, she said.

“It depends on the project and the feeling behind (what) I’m trying to portray. I get inspiration from so many things,” said Friedt.

Friedt was very optimistic about the possibilities that the Graphic Design Portfolio Show had to offer, she said.

“I hoping to get some interest in my portfolio, my work and make some connections,” said Friedt.

“Other than that I’m here to celebrate with my classmates. It’s been a great experience,” she said. 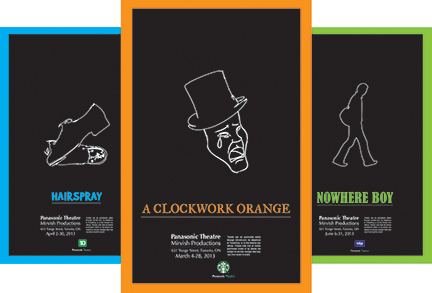 An example of graphic design work done by Olivia Sanders.