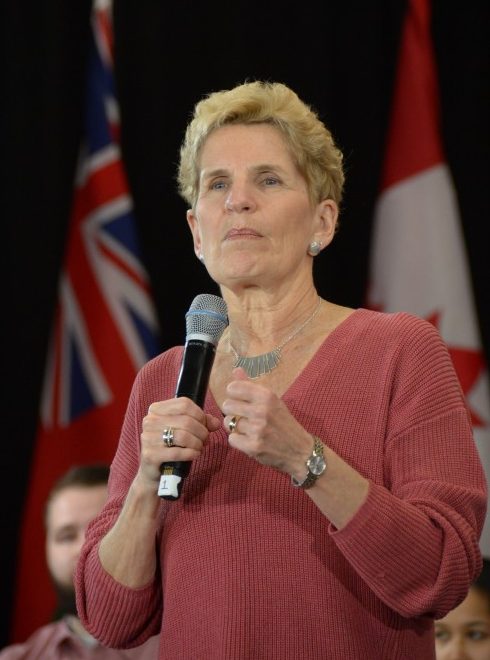 Twelve weeks to go until election day in Ontario and Premier Kathleen Wynne is trying to rally younger voters to cast their ballots.

“Doesn’t matter who you vote for, come out and let your voice be heard,” Wynne said in a campaign whistlestop at Humber’s Lakeshore campus Friday morning. She told the audience if they didn’t vote, it increases the influence someone older would have in the political process.

But while calling for youth engagement in politics, Wynne outlined the changes implemented under her leadership, many that were focused towards Millennials. They include the rise in the minimum wage, funding increases by OSAP, Pharmacare for those under 25, mental health initiatives, and the party’s commitment to fighting climate change.

“We need you to talk to everyone in your circle,” she prompted the crowd, stressing the importance of democratic engagement among youth.

Wynne was speaking to a room full of about 100 Humber students as she outlined the importance of pursuing an education.

“Here in Canada we believe if you get the grades, you get to go [to post-secondary school],” Wynne said. “It’s not about how much your family makes.”

She said there was unanimous agreement among Liberals about equal access to post-secondary education.

Voters head to the polls on June 7 as Wynne faces Doug Ford, who was elected Ontario Progressive Conservative leader on March 10, and NDP leader Andrea Horwath.

“He wants to run the government like a business,” she said. Ford cares only about cutting taxes for the rich, Wynne said.

She said Ford stands for a free market and is against rent control and housing affordability, both hot button topics among Millennials.

In a question and answer session with students, Wynne also described Ford’s plan to sell marijuana at corner stores as reckless.

“I think the notion of having cannabis in corner stores is wrong-headed,” she said. “I think it would not be a good thing for communities or for young people, so we’re not going to go down that road.”

Wynne said Conservatives have been silent about any plans to deal with climate change.

“There’s no greater threat than the warming of the planet,” she said. “They don’t have a plan to build a green economy” and said the Tories don’t appear as they don’t care about having one.

The Lakeshore stop Friday was part of her campaign travels that would see her join morning prayers at the International Muslim Organization of Toronto, and later help launch a local campaign in London, Ont.