On-court conduct crucial in heat of the moment 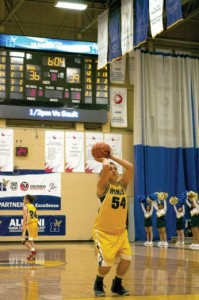 Humber’s athletes have endured the growing pains of sharpening their professional conduct in order to be successful in a school known for its decorated varsity programs.

The Humber Hawks have been able to defend its reputation as a dominant school in varsity sports by developing themselves as mature professionals in games where tensions have risen quite frequently.

Sometimes however, staying cool under pressure is tough.

Jenn Bowers, who played for the Durham College women’s volleyball team before becoming an OCAA volleyball referee, recalled her days as a varsity athlete for Durham, where opponents would get under her skin intentionally to throw her off.

“I would just ignore what they were doing, otherwise I would lose my focus,” said Bowers.

The men and women’s basketball teams at Humber College are no strangers to such situations. The Hawks basketball teams have maintained a passionate rivalry for years against their Brampton counterparts, the Sheridan Bruins.

Humber’s men’s and women’s teams defeated the Bruins 86-84 and 69-63 in their respective matchups.

The women’s team victory was marred with a brief altercation near the end of the game, when Humber centre Brenda Carachure battled for a rebound against Sheridan’s Haeven Durrant.

Both players were tied up with each other and Durrant responded by shoving Carachure after the referee already stopped the play.

“There was a jump ball between me and the other player,” said Carachure, a police foundations student. “She all of a sudden came really, really close to my face, and I really did not like that.”

Carachure responded by pushing Durant back before officials and teammates separated the two players.

“She had that intention and I didn’t feel right, so we had a little confrontation there,” said Carachure. “It was a ‘get off me!’ kind of thing.”

Power forward Aleena Domingo sprinted from the Hawks’ bench to hold back her teammate when the scuffle took place.

“I didn’t rush in to fight, I rushed in because I have her (Carachure’s) back,” said Domingo. “I would help her come away from the situation.”

In a recent volleyball game Bowers officiated, she recalled tensions escalated at the end.

“The thing they always forget is the game isn’t over until I sign the scoresheet,” said Bowers. “I still handed out red cards for the misconduct. The coach got a little out of hand and threw a chair.”

Players and coaches may get frustrated sometimes because they don’t necessarily understand the rules the same way as referees do. Bowers recommended players and coaches to become a referee so they can have a better interpretation of rules.

“It can cause you (the player or coach) to get a little more upset because you interpret it a certain way and then you’re wrong about it,” said Bowers. “You think the referee is an idiot, basically, when in fact you’re the one who doesn’t understand the rules.”