A newly proposed bill might make voting more difficult for people without fixed addresses, potentially affecting certain populations such as students living away from home.

Students could be turned away from polls since the adoption of the Fair Election Act, introduced by the Conservative government on Feb. 4, and passed by the House of Commons on Feb. 10.

The law brings many changes to current election law, for example, banning unauthorized robocalls, allowing election results to be published before polling stations closed in Western Canada, and creating a new agency to conduct investigations into election irregularities and fraud.

“The Fair Election Act will ensure everyday citizens are in charge of democracy by putting special interests on the sidelines and rule-breakers out of business,” said Minister of Democratic Reform Pierre Poilievre in a statement. 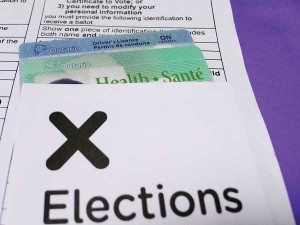 Opposition parties and independent groups, however, strongly criticize other changes to the election law proposed in the bill, particularly its voter identity requirements.

Under the new law, voters can no longer use the voter identity card they received by mail as proof of address.

“Students living away from home will be turned away because of the elimination of voter ID cards,” said Mussawar Ahmad, 23, a second-year sustainable energy student, and the president of Humber’s New Democratic Party Club.

Cuillan Schmid, 20, vice-president of the NDP club, doesn’t have a valid proof of address to vote in Toronto when he attends school at Humber since his driver’s license and bills all show his address in Sarnia, his hometown.

“For many students, seniors, and low income voters, getting or changing their driver licenses or the new health card with pictures on it may not be possible. Their ability to vote will be affected.” Schmid said.

The new laws will also eliminate vouching rules, which formerly enabled voters without proper identification to be vouched for by another person from the same polling division, if the latter could prove their identity and address after taking an oath.

In the 2011 federal election, more than 120,000 voters voted under this system, according to Election Canada’s statistics.

“The government claims that 25 per cent of the voters who voted by vouching contain irregularities, but they were mostly errors in paperwork, which were made by volunteer staffs at the polling stations,” Ahmad said.

“We should not make voting harder if people are not already voting,” he said.

Leadnow, a grassroots advocacy group, has collected more than 50,000 signatures on its petition against the changes in voter identity requirement.

“Studies in the U.S. show that when a state made it harder to vote, less people voted. It is estimated that turnout rate dropped by 1.6 per cent to 2.2 per cent after several states adopted similar laws (with more restrictive) voting requirements,” said Adam Shedletzky, a co-founder of Leadnow.

“In 2011, about 36 per cent to 73 per cent of students, seniors, aboriginals, and low income voters used voter ID cards to vote since they are more likely without a permanent address, or they moved a lot,” he explained. “The Harper government wants to disallow these rules despite no evidence of even a single case of fraud.”

Cole Swanson teaches visual and digital arts at the University of Guelph-Humber. He thinks the changes might impact voter turnouts and tilt votes in favour of certain groups.

“Any effort to change the process that might impact the number of votes from a group of people who are sitting on the fence already, could impact the vote in a way where you have people who may have very strong ideological or political belief being overrepresented,” Swanson said.

“Really, what we are trying to do is to get more people to vote, so anything that prevented us from doing that can be a bit of a problem,” he said. “I am not necessarily for or against, in the straightest sense, I just think we need to get more people out.”

“It’s bad that people lose the right to vote because of the changes,” she said, adding that she is looking to sign a petition asking the government to reconsider.

Other changes on the proposed bill (such as restricting the roles of Election Canada, and increasing the personal donation limits) are also criticized as moves favourable to the Conservative party.

Recent efforts by the NDP in the House of Commons to set up public hearings across the country on the proposed bill have been defeated by the government.

“What we want to do is to scrap this bill and to have Election Canada involved to help create a new bill,” Ahmad said. “The government has not consulted them before the bill is passed, but they are the most qualified people to make this bill fairer.”