Nature enthusiasts were not disappointed at the Centre for Urban Ecology’s latest Owl Prowl.

Bird watchers, and nature enthusiasts witnessed a Great Horned Owl devour its dinner in the Arboretum on Jan. 31, as it perched on a tree branch long enough for onlookers to snap photos.

Chris Bialek, a nature interpreter for the Centre for Urban Ecology, led the familiar excursion through the Arboretum and identified the owl based on its call and size.

“We have four species that regularly come here. We’re looking for all four of them. The Great Horned Owl is one of the easier calls to make. It’s the Screech Owl that is the hardest,” said Bialek.

Coordinator for the Centre for Urban Ecology, Jimmy Vincent said the Great Horned Owl is the species spotted most frequently this winter. 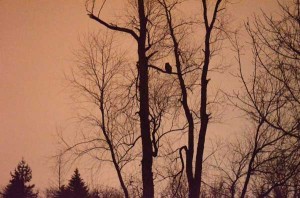 The Long Eared Owl, Saw Whet Owl, and Screech Owl also roost in the Arboretum, explained Bialek, adding owl sightings occur about 50 percent of the time at the Centre for Urban Ecology’s.

“It depends on the season. They’re wild animals, you never know if you’re going to see them or not, it what makes it special when you do see them,” he said.

Something to keep in mind according to Bialek, adult-only owl prowls, compared to events with kids, have a greater chance of seeing owls because the group is quieter.

“We usually get a pretty good mix of people coming out,” he said. “There will be some people that may be able to do calls better than I can and some people who have never been out before at night in a nature environment so it’s a good mix and it’s what makes it fun.”

Judy Gordon, one of the 17 participants at the Prowl, has been birding for 20 years and has seen around 200 birds in Toronto and Southern Ontario.

“I started hiking and then I noticed there were birders when I was hiking and the birders seemed to be having more fun,” said Gordon. “They were a lot less stressed and they really were into the nature, not just the birds, so I thought, ‘Those are my people!’”

“I normally don’t see them and they’re so well camouflaged that you can’t really tell so it’s nice to learn about them, and to see them in the wild is exciting,” she said.

The Centre for Urban Ecology hosts four to five annual owl prowl community events, along with 20 to 30 events for schools each winter.