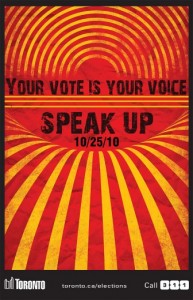 Scarborough student Shaikh Faraz Safdar was the winner of the 2010 Toronto election poster contest. The contest was such a success that the city is running the contest for the 2014 election season. Courtesy City of Toronto

Both the province and the City of Toronto are encouraging people to become more engaged in the electoral process.

With a municipal election on the horizon for Oct. 27, the municipality is holding a contest challenging potential voters to create a video and a poster to engage Torontonians to go to the polls.

The new Design Your Vote contest comes on the heels of contests held during the 2010 municipal election, when people between the ages of 13 and 24 were asked to make creative submissions on the electoral process.

“After seeing the results from the entrants four years ago, we wanted to explore more ways of engaging Toronto in the upcoming election, which is why we are holding these two new contests,” said Toronto city clerk Ulli S. Watkiss.

The city administration also emphasizes that the process should be non-partisan and not endorse any candidate or issue.

Carole Boughannam, manager of elections and registry services for the City of Toronto, noted that the focus of this year’s contests is city services and how voting can affect how they are delivered.

“The purpose of the contest is to get people to understand the municipal election,” said Boughannam. “A lot of our city services, such as recreation, affect youth the most, so we want to build awareness of the election and get a dialogue going.”

Boughannam noted that the poster contest for the 2010 election became the “face of the campaign,” and the current contest offers creative individuals a chance to get recognized while also addressing important issues.

The provincial Liberal government is trying to engage the public as well, this time in preparation for its 2014 budget, expected in spring.

The government said it wants to collect ideas from the public on growing the economy, creating jobs, and protecting public services, said Scott Blodgett with Ontario’s Ministry of Finance.

“We encourage people to send us their written comments – as well as other material which might supplement what they told us,” said Blodgett. “Everyone across the province can take part.”

According to Blodgett, this is part of the government’s efforts to better engage the public.

“By listening to the many presentations from citizens across the province and by reading what people send, the government can then take these into consideration when formulating the provincial budget,” said Blodgett.

People can join the online discussion by sharing comments, thoughts and priorities on the government’s Budget Talks website at www.ontario.ca/government/pre-budget-consultations-2014.

Full details on the contest are available on the City’s website at http://www.toronto.ca/elections/contests.  Emails can be sent to submissions@ontario.ca and phone calls placed to 1-866-989-9002.