Ramnish Kumar made history earlier this month, becoming the first Humber athlete to win gold for men’s badminton singles at a national level.

“I was talking with my teammates, and they told me that Humber has never won a men’s singles title at nationals before,” Kumar said. “From that moment I already knew what I needed to achieve from this year and what I needed to do for my College and my team.”

The 21-year-old’s first season was a success, becoming the OCAA player of the year and an All-Canadian.

“He is a respected player in the league and committed to the Hawks team. He is very coachable and highly motivated to build on his skills on and off the courts,” she said.

Kumar believes the accolades motivated him to show more of his personal qualities rather than his skills.

“That definitely helps me to train harder and prove them right that they are believing in the right person,” he said.

Even with his on-court success and hunger to win it all, Kumar’s road to gold was far from a cakewalk.

Unfortunate circumstances arose for the All-Canadian, as he dealt with the flu and spent several days in bed before the tournament. Kumar had little practice time and felt he lost his touch during his CCAA debut.

“I was just not feeling the same. I felt really bad that I had be sick at this point and this was important to me,” he said.

After losing his first game of the day and just a few points into his second match, Kumar rolled his ankle.

“That’s when the (opponent) crossed on the net and I tried to change direction really quickly. I did some bad movement with my ankle and that’s where I felt it and I was on the ground,” said Kumar.

Kumar’s coach jumped out of her seat and came to her player’s aid.

“I looked in her eyes and I was almost in tears. ‘I hurt myself. I cannot go any further. This is it, the season’s done for me,’” he said.

With a taped up ankle and some safety precautions made clear to Kumar, the badminton player was able to finish the match. But he didn’t feel particularly good.

“My ankle was really weak. I could still feel the pain and whenever I’d try to take a step or lunge to hit the bird, I was feeling really weak and I felt like I was going to roll my ankle and I’m going to sprain it more if I keep playing,” Kumar said.

The fear really got to Kumar.

“It was mostly affecting me mentally. I wasn’t 100 per cent sure if it was there physically,” he said.

He was able to play through the ankle tweaks but he still lost the game. Kumar’s day couldn’t be any worse after losing his first two games.

“I decided to play on and I’m going to give everything because if I lose, that’s it and if I conceded, that’s it. So I’m going to try to play at least and let’s see what happens,” Kumar said.

After having a few hours to rest before the third game, Kumar was feeling better but he was still bothered by the injury.

“I have never played with tape all around my ankle. The movements are different. I couldn’t flex all the way. I couldn’t reach all the way to my ankle,” Kumar said.

After losing the first set, he kicked into a different gear.

“In the second set getting into it, from the first point to the last point, I was yelling out really loud trying to get everything out of my mind, letting no thoughts come into my mind,” Kumar said. “Everytime that I think negatively that I’m going to hurt myself or I’m sick, I just yell out the hardest I can.”

Kumar shouted so much to the point where the referees had to step in and calm him down.

“That time, I calmed down for two or three points but for sure, those negative thoughts were coming back into my head and I had to get rid of them and that was the only option,” he said. “I had to get it out.

“And that’s how I managed to pull out the game and eventually win it. I was really happy at the end of the game that I’m still in and the hope is still there,” Kumar said.

He was matched up the next day against one of the fiercest players in the tournament, Ace Zeng of George Brown College in Toronto.

“He definitely was one of the top players at the tournament and plus he was in his prime,” Kumar said. “Everyone he played he finished them up in two sets including me.”

Zeng really showed off his skill in the first set, beating Kumar 21-13.

“He was that good. I would expect some shot and I’m waiting in some corner and he would do something completely crazy and I’m just standing there, looking at the bird. I couldn’t move,” Kumar said.

He was, however, more impressed than anything.

“Not to over-do it, but I actually gave him props in that game at least four or five times. My coaches in the back were like: ‘what are you doing? You’re just giving him confidence,’” Kumar said.

With his back against the wall in the second set, Kumar played with intensity and passion.

“Everytime I served, I took two seconds extra to look at him, giving him a glare that I’m ready … I didn’t see the same fire on his face that I was thinking in my mind,” he said.

Zeng started letting up and lost the lead in the second set. That’s when Kumar discovered his weakness.

“He was having such a good net shot that day, I was not trying to challenge him on the net. So I was keeping everything in the back (of the court),” he said.

After winning the second set, Kumar started yelling again in the third set and the refs weren’t having any of it. Due to his constant yelling the other day, the officials made a rule where the player can be issued a warning.

Kumar found a way around it by letting out his emotions in a quieter way.

“There was no voice coming out of my throat but I was just so energetic with my body and then people were like, ‘what is he doing? Just get something out of your mouth. Just yell a little bit,’” Kumar said

Due to a few mistakes made by Zeng, Kumar won the match and was heading to the gold medal game against Nicolas Pittman, of Concordia University of Edmonton.

“I was feeling already much better that I went through the first seed and I was able to beat him and now my goal is possible,” Kumar said.

It was fitting that Kumar had to come from behind once again. He narrowly lost the first set but won the next two decisively to win gold.

“When I won, I just threw my racket. I was running around the court, and yeah, that was the best feeling in the world,” Kumar said.

Athletics manager at Humber Jim Bialek believes any coach would be thrilled to have players with the characteristics like Kumar.

“The true mark of a champion is being able to dig deep and find another level of play and he did that throughout,” he said.

“I think you can just go look at (Kumar’s) game and what he accomplished there,” Bialek said. “I think it touches so many bases on what you want your athlete to do.

“He was passionate, he overcame obstacles, and he elevated his game,” he said. “I don’t know what other adjective you can put into that that makes a champion.” 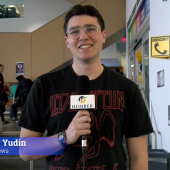 Humber athletics is helping some students with mental illness

Humber ends regular season with a loss against rival Sheridan