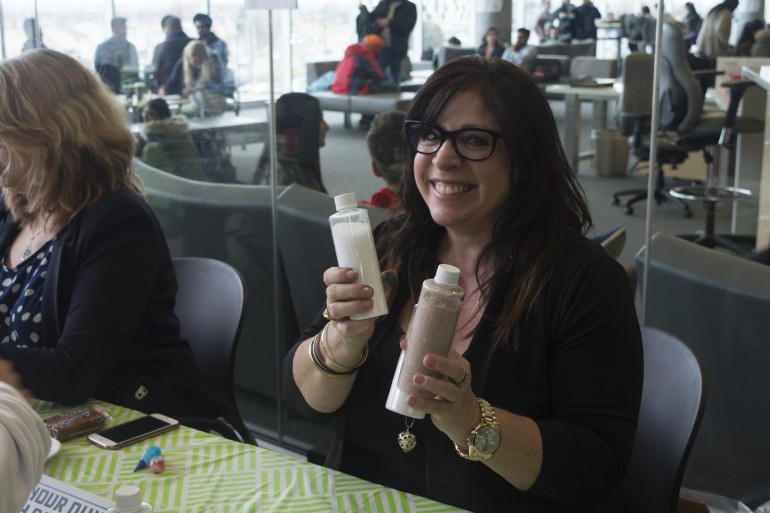 Maria Suarez, the Recess coordinator, said students needs a relief from the stress of the condensed semester and lack of reading week. (Micheal Thomas)

An animal farm came to Humber’s library on Monday.

Two bunnies, a Guinea pig, a parrot, a snake, a hermit crab, and turtles showed up at the North campus’s Learning Resource Centre as part of Recess Week. Students were able to pet them and take their picture with them.

Maria Suarez, a Recess coordinator, said the event was “a relief for the students” because Reading Week was cancelled for college students. She said it was a bit of a reprieve for stressed out and overworked students.

A source of the pressure on students in the Humber community was the five-week faculty strike last term that rearranged this year’s semester. More than 2,000 students left the school and reading week being completely cancelled.

Recess Week, however, has been part of Humber for about four years, and it includes the petting zoo, contests and other fun events, including Wellness Day, Games Day and Arts Day.

Percy the therapeutic dog is scheduled to arrive at the LRC Library between 2 p.m. and 3 p.m. Monday.

“I believe when it started, they wanted to bring something in for the students,” Suarez said. “Someone came up with the idea of bringing some games in, so sometimes we’ve had board games.”

She said organizers plan to introduce something new each year.

“It gets bigger and bigger for the students,” Suarez said.

“I think this gives a little break for them to just come and the enjoy it too,” she said. “We have a therapeutic dog named Percy coming in on Friday, and they always ask when Percy is coming back.”

The events were held at all three campuses.

Recess is no longer exclusive to Humber’s Library as everyone on the third floor of the LRC is now involved.

“IGNITE, the Math and Writing Centre, and other departments become involved too,” Suarez said. “They think it’s a good idea.”
Suarez said she believes the week’s events are a good idea to replace this semester’s reading week.

“I think it’s a great idea especially because you can feel the stress sometimes when all the assignments have to be done,” she said.