Joyita Sengupta says things are changing in her North Etobicoke neighbourhood, and it’s for the better.

The third year Humber Bachelor of Journalism student says some of those positive changes came after the Toronto Police 23 Division’s Somali Liaison unit began making inroads into her community.

Sengupta has been a resident of the North Etobicoke neighbourhood known as Little Mogadishu for nearly 17 years, adding she lives in the high-rise building 320 Dixon Rd. that was a major target in this past summer’s Project Traveller raid.

She said she took the initiative to do some research into the origin of the some of the community spaces that were recently developing in the neighbourhood.

“I didn’t even really realize that the Somali Liaison Unit was behind it, I just noticed some positive changes,” she said. “I noticed that there was a homework room in the lobby of 320.”

Dixon, and there was a new computer room that opened up in the 330 building just next door.”

Toronto Sgt. Chris Laush is one of the two original officers in the Somali Liaison unit.

“We started off with two officers, myself and P.C. Horace Harvey and we quickly realized there was a lot of work to be done to build trust and build bridges with this community,” he said.

Currently consisting of six officers, Laush said the underlying purpose of the unit is to develop an open and honest line of communication between the Somali community and police.

Humber Restorative Community Justice professor Lynn Zammit said in order to serve the community better there has to be an open dialogue, a sense of trust and sense of commitment towards looking for solutions.

“The fact that police are engaging community members in a conversation about justice within their community is a pretty profound move to make,” she said.

Laush said bridging the gap that exists is a huge motivation for initiatives like the virtual town hall meeting that the unit organizes periodically.

He said the virtual town hall meetings provides the community with the opportunity to share how they feel about police initiatives and provide recommendations on how to proceed in the immediate future.

Zammit said the idea of a virtual town hall meeting is about policing as community development which allows for residents to share what their key concerns are on what is and isn’t working within the community.

“By opening up the dialogue you have a chance to really look at that community from the inside out as opposed to outsiders coming in and deciding what they think should be the solutions,” Zammit said.

Sengupta said a great aspect of the liaison unit is there approach on integrating within the community in attempt to understand their practices and customs as opposed to imposing.

“You have to accommodate what their current lifestyle is. Instead of just coming in and trying to change everything that they do, you have to acknowledge what’s good and bad about it and work with it,” she said.

Zammit said the technique involved in the virtual town hall meeting is transformative because it engages people in a dialogue intended to build trust and this allows police to be viewed in a different role.

“It’s asking people to come into that dialogue talking about solutions, and anything that is solution focused is obviously going to be better than older methods which just were enforcement,” she said adding that the level of anonymity involved in the process can provide comfort for some participants.

Sengupta said she’s heard from other residents that the virtual town hall meeting — via telephone with a translator available —is a great way to share unfiltered views of the police outreach activities within the community.

Laush said, adding that in person the “uniform” might be intimidating for some and this provides a forum to mitigate that.

Laush said this is a good way for the unit to evaluate the work they’ve done in the past six months to a year from the perspective of those it is intended to help.

Sengupta said the community has historically had a strained relationship with the police, adding that this type of outreach is far better than attempts in the past.

Sengupta said despite an initial resistance, the residents of the Dixon neighbourhood have slowly but surely become more receptive to idea of the liaison unit and positive changes they are trying to implement.

Laush said it’s the mission of the unit to prove they’re here to help for the long haul, and that’s why they have partnered up with various social organizations in the Rexdale area to develop programs and build social spaces at several spots in North Etobicoke. 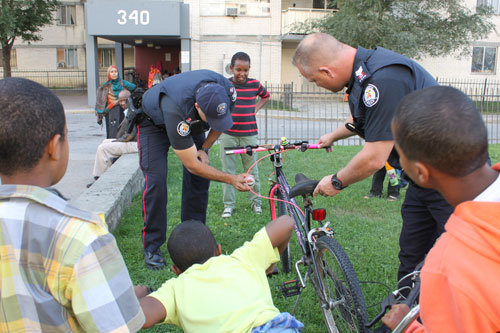 “Building the computer rooms and the libraries, we’ve had different groups donate computers,” he said. “The list goes on and on, everybody who we asked was more than willing to jump in and help out. We couldn’t do it without all our community partners.”

Sengupta said it’s been inspiring to see the resources in the community spaces for residents who otherwise might not have access to some of the services offered.

“As for the computer room, I’ve seen a lot of older Somali and South-Asian men and women that maybe don’t have computers in their homes,” she said. “They’ve also been super accommodating because they have men’s only computer time and women’s only to respect the religious climate of the area, which I think is a really nice touch.”

Sengupta said seeing the positive outcomes of programs such as the homework club has really made residents in the community see the benefits of being receptive to “outsiders” such as the liaison unit.

“The kids love the homework club, they actually line up before it even opens. It opens at 4 p.m., and I’ll see kids waiting at the door,” she said. “I think seeing little things like that has allowed the community to open up to that particular group of police officers a little more.”

She said the liaison unit has the right approach by starting from the “ground up” with a lot of children centered initiatives, but believes instilling positive values from the “top-down” is equally as important.

Sengupta said looking into the future, being a tight-knit community puts Dixon in a paradox where its greatest attribute could also be its greatest detriment.

“In general, people who live in Dixon, especially the Somali community, they’re very private people. It’s a very homogenous group that lives in Dixon, they sort of have their own community and they like to do things on their own in their own way,” she said

Laush said this social based form of policing is new and they may not have all the answers, but there is a willingness to find them. He said officers in the unit are all positive about what they’re trying to accomplish.

He said things are changing in the dynamic between the police and the community and he wants this to continue.

He said it’s understood the process of bridging the gap is still in its infancy and it’s important to understand it can’t be rushed.

“What started off as baby steps has turned into a much bigger picture, and there is still a lot more to be done down the road. You can’t go to fast with the Somali community, you’ve got to build the trust slowly,” he said.