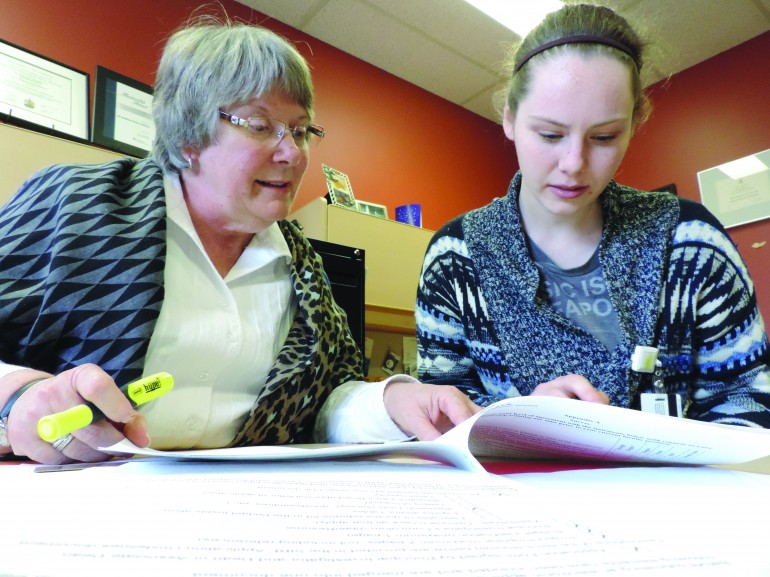 Kathleen White-Williams (left), a professor of the Bachelor of Nursing program, and Kaylee Fraser a third-year nursing student working on a research survey. (Photo by Nicole Williams)

Neil Armstrong, the first man on the moon, said research is about creating new knowledge. And research is sometimes a difficult thing to do with a lack of funding, assistance and know-how.

That’s where SIRF comes in at Humber.

The Staff Initiated Research Fund, or SIRF, first began in 2007 when a dean of research was brought to Humber.

Every year, faculty can apply for funds up to $8,000 to conduct their research projects. It was one of the first initiatives introduced by the dean of research. Getting funded for research is a difficult thing to do, and still remains so today.

Laura Keating, the current administrator of SIRF, and Laura Holmes, a project coordinator, explain that SIRF is about more than staff. It’s about involving students.

“It’s an opportunity to bring students in as assistants,” said Keating.

“Every project must bring in some form of student involvement. It’s one of the requirements for the project,” she said.

There’s no limit to the kind of project that can be funded by SIRF.

“We’ve had projects from faculty across all eight schools of Humber,” said Holmes, “every project is different.”

That being said, successful proposals do share certain things in common.

“We also like to see its scale. What kind of impact will this project have on the greater community,” said Holmes.

Not all proposals come through the SIRF door looking like a picture of success.

That’s where Keating and Holmes come in.

“We help get projects where they need to be so that they’re likely to succeed. Faculty can express their desires with projects and we help make it happen,” said Keating.

Beyond funding, SIRF provides support: feedback on applications, help with patents, and training the research assistants.

“The goal is to get these projects to a place where staff can get funding from external funding partners. At SIRF, they can make mistakes, and then learn from them,” said Keating.

What is just as important for SIRF as getting research projects funding is getting students involved in research.

“Our core practice is to provide meaningful experience and employment for students,” said Holmes.

Staff can teach students how to do the work that students can actually put on their resumes she said. Kathleen White-Williams, a professor at the Bachelor of Nursing department, and Kaylee Fraser, a third-year nursing student, are proof of concept.

White-Williams was at a meeting about faculty involvement in nursing scholarships in Edmonton two years ago, when she started to wonder about the challenges faculty faced in getting involved. She decided to seek funding from SIRF and was quite successful.

“Hopefully, within the next month, our survey will launch,” said White-Williams.

With that funding, White-Williams was able to hire Kaylee Fraser as her research assistant.

“Kaylee has been instrumental in helping develop and make changes to the survey,” she said.

For Fraser, it’s an opportunity to get valuable experience she can put on her resume.

“Getting the experience has been amazing. The funding has enabled me to be able to work while being in school,” said Fraser.

Being a part of this project, Fraser has been able to work with universities and colleges across the country.

“By the end of this process, I feel like I’ll have the skills I need to do this again in the future,” said Fraser.

SIRF is taking applications for new projects this year. The deadline is April 1.