Humber’s robotics team is currently preparing to compete in three competitions next year.

Mauricio Toigo, Humber mechatronics skills coach, said they are now training the team for the competition.

The 2019 Skills Ontario Mechatronics competition is the first event they’re competing in. This event is taking place in May at the Toronto Congress Centre from May 6 to May 8.

Not only is the team going to provincials, they’re also going to nationals in Halifax later next year as they were one of the top two teams from the national competition last June.

If they win nationals, the robotics team then moves on the world competition in Kazan, Russia.

Mateusz Cwalinski, a graduate from the Electromechanical Engineering Technology program who is on the team, said the school strike last fall affected them when preparing for last year’s competitions.

“Yes we did have more time to train when the strike was happening but when it was over we had a hard time catching up on our school and train at the same time,” Cwalinski said.
Bogdan Malynovskyy, a third year Electromechanical Engineering Technology and fellow skills competitor, agreed with Cwalinski.

“We did get extra time of training but once we came back catching up on school work did take time off of us training,” Malynovskyy said.

Toigo said the provincials and the nationals are a little bit different this year. 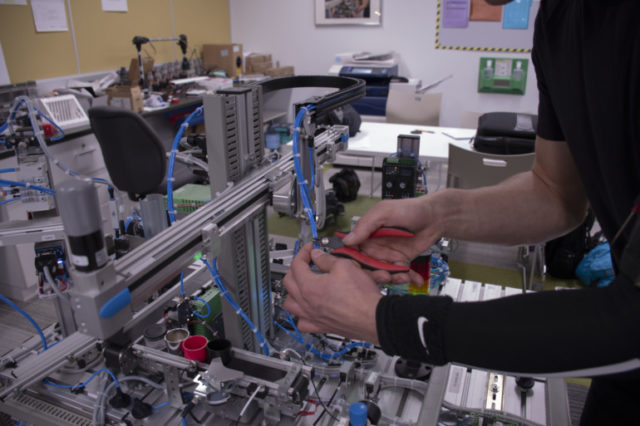 Mateusz Cwalinski, a member of Humber’s robot team, is cutting a wire to see if this will improve the machine he’s using for training at Humber college. (Pirasanth Gunasekaram)

The Ontario skills competition will not be a qualifying competition next year since the Humber team already won that, he said. He said only the final two teams from this year’s competition are competing and Humber is one of those teams.

Toigo said he would like the team to work on improving communicating.
“One of the things that went wrong last year was that we weren’t organized and our communication during the competition wasn’t perfect so that’s one thing I would like to improve,” he said.

Cwalinski said he isn’t fully confident because there’s a lot more work to be done.

“We’re getting there but there’s still a lot more work to be done and there’s a lot more hours and research that we need to put in order to be fully confident in ourselves,” Cwalinski said.

The duo is also volunteering for the robotics competition for high school students that Humber is hosting for the first time. Malynovskyy said that this won’t take away from their training.

“It’s only a two-day event so it shouldn’t make a huge difference to our schedule,” said Malynovskyy.