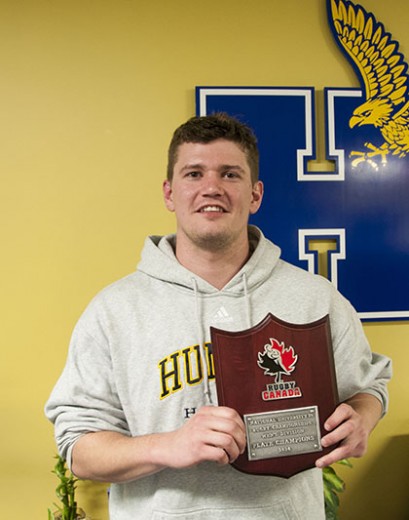 Graham Dewar stands with the plaque awarded to the Humber Hawks for their Plate Division title. (PJ VALOIS)

The Humber Hawks men’s rugby sevens team came back from Victoria, B.C. with more than the plate championship. They have the respect of university teams across Canada.

By winning the plate championship, Humber is ranked fifth among all Canadian university rugby teams at the tournament.

The Hawks started slow losing their first two games to two of the nation’s top teams, the University of Victoria and Queens University. They rebounded with a 33-0 defeat of Mount Royal, before being relegated to the Plate Division after a second loss to Queens in the quarter-final.

After making the Plate Division finals by defeating the Royal Military College, the Hawks beat Western University 27-12 to claim the plate championship.

“Once we relaxed it all fell into place on the last day,” said Humber second row player Graham Dewar, speaking about their big win against Western. “We played almost perfect rugby.”

Despite heading into the tournament as the underdogs, second row player Greg Giliauskas was happy to come home with the championship.

“It is nice to know that we are one of the top five teams in Canada.”

Head coach Fabian Rayne said the performance against Western was the best sevens rugby the Hawks have played all year, as the Hawks proved themselves on the highest stage in Canada.

“It felt like all the hard work we put in was worthwhile,” said Rayne, who also noted the team has a lot of work to do to play consistently at that level.

A major objective going into the tournament was to get Humber players noticed on the provincial and national level. Rayne said there was interest in three Hawks players including fly half Joseph Ginsberg, outside player John Sheridan and winger Justin Tota.

According to Rayne, it seems inevitable the OCAA will adopt the sevens style of rugby. What’s most important for Rayne is that his team competes at their highest level, whether it’s against OUA or OCAA teams.

The recent exposure the Hawks received at the university level has lead to several invitations to tournaments, Rayne said. The Hawks will compete in their next tournament in Waterloo next month.