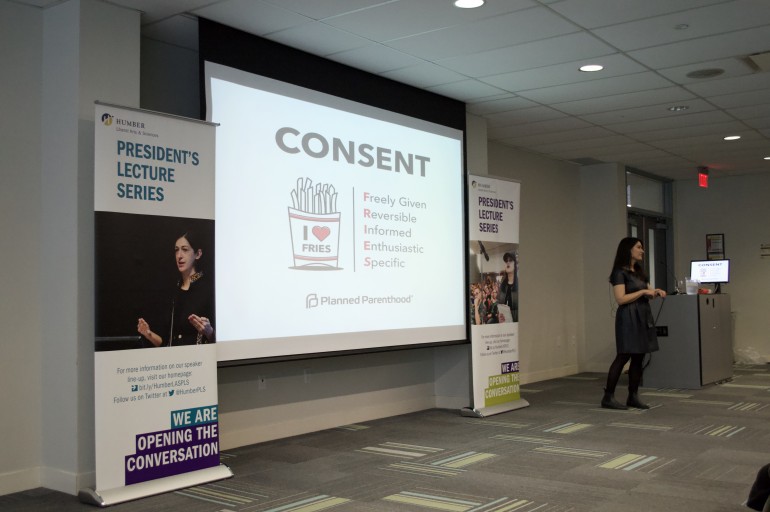 “We are going to have hard conversations,” she told about 50 people during the President’s Lecture Series talk at Lakeshore campus on Tuesday.

The coordinator of the Office of Sexual Violence Support and Education at Ryerson University brought the #MeToo movement to Humber’s Lakeshore campus Tuesday to open a discussion about sexual violence.

Khan, a feminist, activist, and anti-sexual violence educator and advocate, talked about the importance of having conversations and receiving comprehensive education on the issue of sexual harassment and sexual assault.

“Things are getting uncovered and it’s going to feel uncomfortable because we’re going to have to have really hard talks about what we’ve seen as normalized,” she said.

The movement started as a hashtag to help understand the scope and the prevalence of sexual assault and harassment, especially in the workplace.

It has gained traction over the past year and has encouraged many survivors, including Khan, to speak up and speak out about their experiences.

There are more than 600,000 sexual assaults that happen every year, according to Statistics Canada. The vast majority of incidents go unreported and as a result, many survivors are not heard or represented by the justice system.

There is also a tendency to blame and shame people in the cases of sexual assault, which makes coming forward that much more difficult.

The struggle to end sexual assault and harassment was transformed when survivor Tarana Burke created the hashtag #MeToo last year. The hashtag went viral as others shared their trauma.

“We as a society need to be more inclusive and be more accepting and hear people out. We need to really work on believing survivors and being there for them,” said Raeghann Labelle, a student at Humber College.

Many students, teachers and faculty members in attendance of Khan’s lecture at Lakeshore campus found value in the discussion. Her talk contained sensitive matter about pleasure, sex and consent but the reasons for her uncensored discussion was not lost among the room.

“I think the #MeToo movement is a positive thing and its bringing awareness to a situation that’s going on.”

Khan said conversations about sexual assault have been happening in Canada for decades.

But this social movement is an extension of an ongoing struggle for the right of men and women to be protected from sexual harm. She said the struggle should include all races and all sexualities.

“This #MeToo movement is part of a larger movement, and it’s not going to be over until gender justice happens,” Khan said.