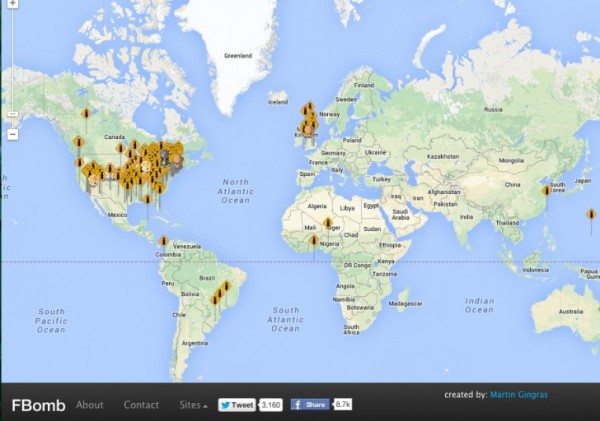 SCREENSHOT OF FBOMB.CO
A map that shows where in the world the f-bomb is being dropped. The map is updated every minute on the website.

“The idea behind the site came from a discussion I had in the summer with a bunch of my colleagues about how the f-word is misused,” Gringas said.

He said an application programming interface, or API, is used to access the tweets through Twitter. The site features the feed of tweets as well as Google Map technology to visualize where these tweets are coming from in the world.

“So it uses Google Maps to create the map and plot the tweets, and I use a Twitter API to subscribe to the twitter stream based on a filter of any of the fu—, f—ing, f—ed. Any of those three words that are used in the hashtags or in the text,” he said.

The site has thousands of viewers a day, and at its peak, hits from 40,000 to 50,000 views. The website, www.fbomb.co, has been up and running since Oct. 27. It also has a sister site called Shtstorm.

“It has slowed down a bit lately. But I got a ton (of views) when there was a bunch of articles posted.” Gringas said.

The context in which the word is used varies, and seems to be popping up quite often.

“I see it dropped in every context; from the weather to school, work, love life a lot, stuff like that. The scope is almost unlimited in the way it is used.” Gringas said.

Many people’s behaviors seem to change in an online environment.

“We have behavioral cues that our environment sort of tells us sort of how to behave. And on the Internet you’re free of all that. A lot of the times, people’s subconscious takes over and they feel quite comfortable to give you unfiltered aspects,” said Andrew Tibbetts, a counsellor at Humber’s North campus.

Some people even notice their behavior changes while online.

“On the internet I am more immature, and in reality I consider myself a fairly serious guy. Profanity wise, I don’t really change,” said Matthew Griffith, a second-year media communications student at Humber.

Students at Humber should be aware of what they post online.

“Before I post anything I always think who is going to see this,”Griffith said.