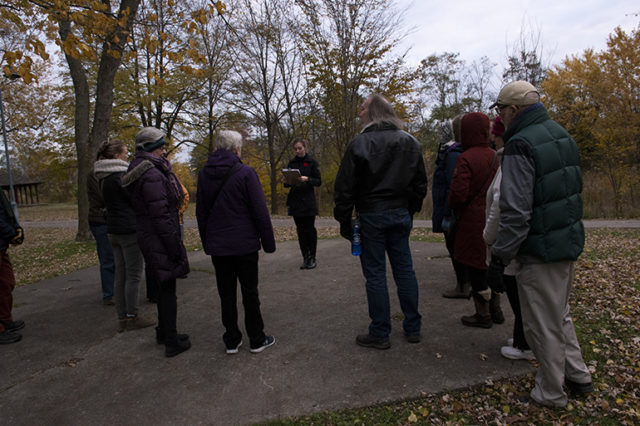 The group stands on the remains of the women’s gazebo located in Samuel Smith Park. (Madison Raye)

It’s not your typical walk in the park as participants are guided through the historical features of the Humber Lakeshore Campus.

The Humber College Interpretive centre gathered curious visitors for a tour of the Colonel Samuel Smith Park at the Lakeshore campus on Nov. 8.

The monthly tours are offered by Jennifer Bazar, the curator of the Lakeshore Grounds Interpretive Centre. Bazar shared her extensive historical knowledge with the group, providing insight into the past.

Nadine Finlay, a tour guide and part-time worker at the centre, led the group with Bazar through the park, briefing them on the history of the area.

Finlay and Bazar began by sharing the history of the Power House.

“The Powerhouse was built by the male patients of the psychiatric hospital in 1937. The red brick cottages were built in 1888 and are original to the Lakeshore Psychiatric Hospital,” Bazar said.

The hospital was divided by gender, where men and women slept in different areas while staying in gender specified gazebos.

“They liked to segregate the male and females for the entire history of the hospital, up until 1974,” Finlay said.

Drifting down the path away from Humber, the history becomes man-made, newer and more recently developed. Finlay, standing in open field, told the group the area used to be a wasteland and is now a nature conservation area that is home to several types of birds.

Friends of Smith park, a local community of residents and park users dedicated to helping the park, made and donated several birdhouses to the area.

“It’s a special kind of place, and you don’t want to stand up close to the boxes and peer in because your invading their habitat at that point.” Bazar said.

Down by the lake lies the Lakeshow Yacht Club, which opened in 1991.

“I was pleasantly surprised, I’ve always lived in Etobicoke and I’ve been down to the skating rink and to the others parks, but no I didn’t really know anything about here,” said Anne Ginou, a visitor to the park and a guest on the tour.

Bazar and Finlay told the group that the people who lived during the time of Colonel Samuel Smith and the psychiatric hospital helped contribute to the park’s history.