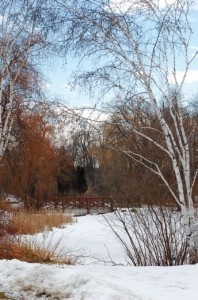 The Arboretum has received more than $100,000 from TD Canada Trust over the last decade. Photo by Danielle La Valle

Much like the deer that thrive in the Arboretum, Humber’s Centre for Urban Ecology and surrounding nature preserve thrive on community partners’ support.

Centre coordinator Jimmy Vincent said TD Canada Trust’s Friends of the Environment Foundation has been one of the biggest supporters of the programs at the centre.

“TD FEF has given us over $120,000 in the past 10 years and thousands of students have taken advantage of that,” said Vincent.

The Arboretum offers a glimpse of wildlife in a natural habitat and it’s not uncommon to see various creatures roaming its land. Last week was no exception as deer were seen foraging on birdseed in the feeders outside the windows of the office.

The Arboretum and Centre for Urban Ecology provide students, usually junior kindergarten to Grade 8, with a self-directed learning opportunity to help their understanding of the natural environment, he said.

“What we do is use that fundraising to help off set the cost of a trip for students,” said Vincent.

“I think the work at Humber is so important to the urban greening and environmental education space so it hits the main pillars that we’re often looking for,” she said.

Scotchmer said the bank’s environmental charity donated more than $430,000 to 90 programs in the Toronto and Durham Regions in 2013 and just over $360,000 of that total went to Toronto programs alone.

She added over 150,000 TD Canada Trust customers donate one to two dollars monthly with 100 percent of the donations going back into community environmental projects.

“TD pays for all the admin and operational costs of the foundation so that all the money customers donate goes back into the charitable projects,” said Scotchmer.

Vincent said the Arboretum and Centre for Urban Ecology also get funding from the City of Toronto to offset the costs of maintaining a public garden because the Arboretum is a designated Toronto park.

He said the Toronto and Region Conservation Authority helped restore some of the trail networks in the Arboretum last summer.

She said Peel, York and Durham regions and the City of Toronto fund the conservation authority in support of the priorities of the regional municipalities.

“The Humber contributions, over the course of time, are in the millions [of dollars],” said McGrath.Vincent said the Arboretum and Centre for Urban Ecology apply for funding from several community partners, emphasizing the collective effort in environmental education and protection.