Humber student Winston Baptiste stared blankly at the gym wall, drowning out the grunts of other powerlifters. His hands wrapped tightly around a long bar, teetering with 45 pounds on each side. A soft breath eases the tension across his shoulders, as his knees squat under the pressure of weights and the coach watches his form. 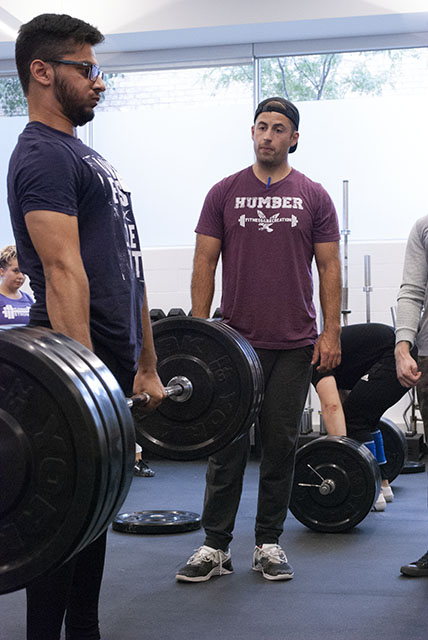 During the first week of school, Baptiste and a handful of others were already facing the first test of their semester at Lakeshore campus: getting a spot on Humber’s powerlifting team.

Progression is the goal for the sport, requiring athletes to maintain their bodies through strict diets and constant stress in order to keep lifting weights past their limits. Once lifters reach a specific goal, the weights continue to increase.

“Students have to do the work,” says Nathania Bron, fitness coordinator at Lakeshore campus’ gym.

“The coaches are there to help assess if they need to change the programming, so they’ll connect with them on a regular basis just to see how that week’s programming went,” she said.

The Humber team’s coach also expects the lifters to also train together outside of scheduled practices.

Bron said the team evolved in the past five years from an initiative in response to Seneca College starting its own community of powerlifters.

“We started off with one lifter,” Bron said with a smile. She said it was a long process to assemble the first team.

“We put it out there, that’s who we got,” she said. “The second year we did the same, so for a good four to five years we did a shout out.”

Across the college, the annual call was simple: asking for any powerlifters with experience and looking to compete.

Word of mouth spread across Humber, drawing in enough athletes to form a team. According to Bron, last year was the first “official” tryout with more than 25 in attendance. About half made the cut.

Now, more than 15 athletes are vying for a spot in the 2018-2019 roster. Student and veteran team member Dimitrije Stosic will be passing on his experience as the new assistant coach.

A graduate in the Criminal Justice Degree program, Stosic is returning to Humber part-time for the opportunity to reunite with former teammates, and help train the new roster for the upcoming season.

“When I found out there’s a powerlifting team at Humber, I was completely intrigued by it,” said Stosic. He said he hopes to move the team past any struggles during training.

“Taking those cues and start passing on that knowledge — keeping your back straight, tucking your shoulder blades back — are just little things that you don’t normally think about, but once you tell them and show them the actual movement, it really makes a big difference,” he said.

Baptiste said that for him, this season is about more than just improving.

“To me, it’s about redemption.” said Baptiste. He had to leave the last season abruptly for personal reasons.

This time, he hopes to meet his own personal goals before graduation. He spent his summer rigorously training until he understood his weight limit.

“My secret to progress is sticking to what you actually want,” Baptiste said. “Sticking forward to it, and keep an open mind to other things.”

The team expects to compete in their first competition at Sheridan College in November and will compete in the annual Ontario Powerlifting Association (OPA) in Markham in February.