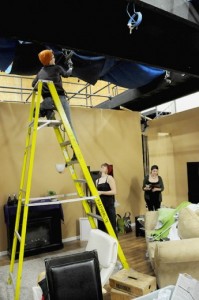 Adam Stroud
Erika Osmani disassembles the set atop a ladder as part of the second year studio dramas project in the film and television production program.

“One of the things I find about this project in particular is that because they’re having this experiential learning experience for the whole month of February,” she said. “It really solidifies where they want to go in the film business with their careers.”

The students themselves write all the scripts in first semester, and after a lengthy process they whittle down the 20 selections to eight short films to produce, O’Brien-Sokic said. The reason the films are all shot in the studio is to provide ample experience to the students before they face the challenges of shooting on-location.

“You learn how to do it here then you take the knowledge that you gain from this project and you take that out on location,” O’Brien-Sokic said.

Lindsay Roberts, 19, was first assistant camera, whose job was focus pulling for the camera operator. Additionally Roberts worked in set building and design, and said she enjoys working in the collaborative environment.

“Everybody gets to know each other better. I feel like I’m much closer with the people in my department,” Roberts said.

Courtney Bell, 19, is another such student, who wrote the film, Vlad, a story about Count Dracula signing up for an online dating profile.

“I’m excited to see what this will look like on screen. To see if it actually turned out okay,” she said.

Both Roberts and Bell described the experience as eye opening, and said it has made them aware of the career path they want to pursue.
All eight films from the second year studio dramas project will be screened at The Royal on College Street in Toronto on Apr. 23 at 7:30 p.m.