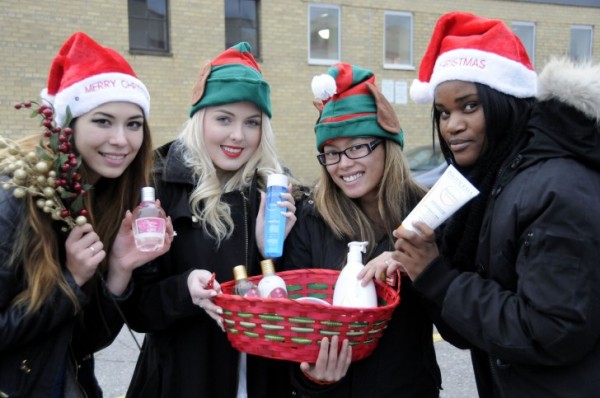 Left to right: Elena Wallace, 20, Megan Traversy, 19, Rillie Javellana, 25, Danielle Francis, 20
Products from Shoppers Drug Mart will be part of a gift basket, to be raffled off for the fundraiser.
PHOTO HANNAH HOLLINGSWORTH

A group of students at Humber is taking the initiative to help victims of Typhoon Haiyan in the Philippines.

Five second-year cosmetic management classmates will host a fundraiser at the North campus today from 11:45 a.m. to 1:30 p.m.

Rillie Javellana, 25, Elena Wallace, 20, Megan Traversy, 19, Emily Burgos, 20, and Danielle Francis, 20, needed to host an event as part of their final exams. After brainstorming together, they decided to use the opportunity to help those in need.

The classmates decided to contact the president of Paco Catholic School in Manila, rather than go through a charity. From there, the funds will be sent with a priest to the province of Samar, one of the places hit hardest by the typhoon.

“That way, we can make sure the people who need it most will get it,” Javellana said. “My friend’s family was living in that area. They’re all gone. Only one of the members survived.”

Shoppers Drug Mart and Lush cosmetics donated items for a gift basket that will be won through a raffle for $5 per ticket. Tim Horton’s will also contribute hot chocolate. Cakes by Marlee have donated 50 cupcakes to help support the cause. Volunteers baked another 100 cupcakes. Food and drinks will be sold for $1 each.

Elena Wallace said she had friends and family that were affected during the Japanese tsunami in 2011, and knows first-hand how loved ones of victims are feeling during this hard time.

“I wished there was something I could do then,” Wallace said. “Now at least I can help with this.”

Megan Traversy said the support from retailers has helped a lot.

“Everyone we ask is willing to help,” Traversy said.

Typhoon Haiyan hit the Philippines on Nov. 8 and caused more than 5,600 deaths. Tens of thousands are still struggling without power, food and running water. More than 1,500 people are reported missing.

Haiyan was the strongest typhoons ever to reach landfall, with winds reaching 195 mph. It caused over $275 million in damages to a still developing country.