Student strike support fund ‘a slap in the face’

That is, until this year.

Her routine, along with that of 500,000 other students, was disrupted when about 12,000 full-time and partial load faculty from Ontario’s 24 public colleges went on strike on Oct. 15.

As Humber students such as Alszegi returned to school, they were informed a fund would be available to assist with “unanticipated expenses” attributed to the strike. 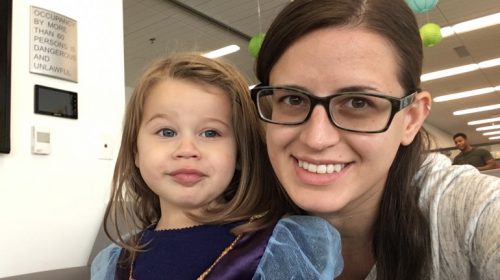 Larissa Alszegi with her daughter. While the strike led Alszegi to lose wages, she is not eligible for compensation. (Larissa Alszegi)

While eligible students can claim up to $500, those losing income due to strike-related schedule changes are ineligible to apply.

“The Student Support Fund’s eligible expenses are those that are incremental due to strike-related reasons,” says the Ontario Ministry of Advanced Education and Skills Development.

“These financial supports for students were determined through consultations with student leaders and their provincial associations and colleges,” the ministry announced. “Lost wages were not identified as an eligible category for reimbursement.”

Humber College’s student union president said she was involved in the preliminary stages of the fund, but not in finalizing its criteria.

“Most student union presidents across Ontario [were] in conversation with the Advanced Education Minister [Deb Matthews] when she mentioned [the ministry was] planning to do this. I was included in that conversation,” IGNITE President Maja Jocson said.

“I was not involved in the final decision making of guidelines and what eligible expenses will be for this fund. The minister’s office was the one who set out these guidelines,” she said.

Alszegi says being ineligible for the fund will have a significant effect on her finances.

She said the limitations imposed on the funds feels like “a slap in the face.” The ministry, she said, doesn’t seem to understand the impact the strike had on people like her.

“Every day I am in school I am putting my family deeper into debt,” she said. “For [the ministry] to say that loss of wages is not an incremental cost is extremely ignorant and disrespectful.”

John Iacolucci, a partial-load faculty member at Georgian College, says it’s “common sense” every student has access to the fund.

“I think all students should have been granted the $500,” Iacolucci said.

“It’s only common sense that prolonging a semester, as the result of a strike, would have economic effects on all students,” the English instructor said.

The ministry says students who are ineligible for the fund but need “further financial assistance” should contact their financial aid office to discuss alternatives such as bursaries or scholarships. Eligible students have until the end of the Winter 2018 semester to apply for the fund.