Students and faculty Take Back the Night

“Whose streets? Our streets!”

That was one of several chants cried by Humber students and faculty as they marched around campus during the annual Take Back the Night event.

The Take Back the Night movement aims to raise awareness about sexual and domestic violence.

“Ever since then, it has really blossomed into this incredible social movement that many rape crisis centres have adopted into their programming,” she said.

Flood said Humber has hosted the event for three years to demonstrate its commitment to ending sexual violence.

“Essentially, it is an event for survivors to allow them to have a voice on campus,” she explained. 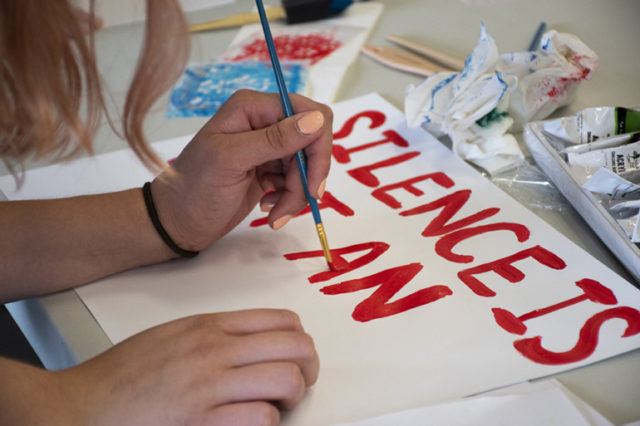 One attendee writes “Silence is pain” before the Take Back the Night event at Humber North. (Madison Raye)

“When I was 18 years old, I was a freshman in a college in Ontario. And I was sexually assaulted, raped, at the time of my birthday at a house party,” she said in an interview.

“The words Take Back the Night means to me is that I have the ability to reclaim my voice, my power and my right as a survivor of sex assault and violence,” Berkeley said.

She said the night is important because it shows survivors who is supporting them and said she especially wants to increase the number of men supporting the effort.

Berkeley later stood in front of the crowd of about 60 people sharing her experience.

“It was here, where something was gained and lost,” Berkeley said. “He gained another notch on his proverbial black belt, his trophy for taking a Black woman’s innocence.

“I lost my right, lost my voice, and lost my identity as Ariel Berkeley,” she said. “Today, I stand in solidarity with you all as a resilient and strong woman, who is ready to take back our voices, our rights, and our night.”

Sidrah Ahmad, who works with the Ontario Council of Agencies Serving Immigrants on the Immigrants and Refugees against Domestic Violence campaign, told the crowd the night is important for survivors.

“It means that survivors are claiming space for themselves, and saying that we’re not going to be silenced and pushed into the corner just because we’ve been through violence,” she said.

Ahmad said she and other survivors were there to share their stories and to have their allies stand with them.

“We’re here to stand up against sexual violence, and we’re here to create a world where it doesn’t exist anymore,” she said.

No one held back as they screamed their chants of triumph as they marched around the perimeter of the school.

The march started just outside the Learning Resource Commons building and moved along Humber College Boulevard before returning to the LRC.

Volunteers like third-year psychology student Emelia Maceasik were on the scene to make sure everything ran smoothly.

“To me, Take Back the Night means standing with women, it means solidarity, it means advocacy,” Maceasik said.

“And it means walking alongside every single woman out there, and I mean all women. So, incarcerated women, women of colour, LGBTQ – we stand with you,” she said.

Kerry Archibald, a Justice Studies student, was another volunteer.

“We’re coming together for such an important cause, standing by and making sure that [sexual assault] doesn’t happen to anyone else,” Archibald said.