Humber College held its annual Take Back the Night march on Thursday to help raise awareness for sexual violence against women.

Students from different programs came out in droves to take a stand on campus.

Joanna Turek – a member of the Consent is Sexy crew, an on-campus organization that challenges stigma around consent and sexual violence – said it was “created to spread awareness and help educate the community, to reach wide numbers of people on campus.”

That’s the reason why events like Take Back the Night were created.

“We listen to and believe survivors,” she said. “We guide them to professionals in Humber College or the University of Guelph-Humber who can really help them.”

Bansri Kakad, a student in attendance, had some strong feelings about going to the event to lend her support.

Akash Lakhotia had never been to an event like this before, but cam out to learn and see survivors at the forefront of the event.

“Take Back the Night teaches us how we should behave,” he said. “I saw some posters, and I thought, ‘oh my god. This stuff really happens?’” 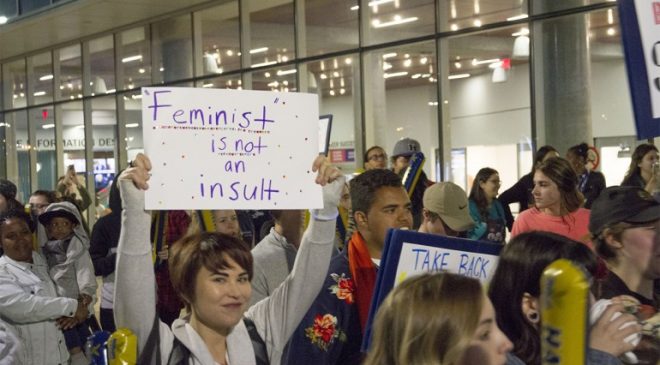 Tiffany Farrugia, a Justice Studies student, marches and chants during the Take Back the Night March on Humber’s North Campus. (Kit Kolbeggar)

For Natalie Elisha, a member of the planning committee, the event is intended to increase understanding of what consent is, what rape culture is, and how we as a community can do better.

Approximately one in three women in Canada will experience sexual assault or violence in their lifetime, according to statistics from the Ministry of the Status of Women.

The numbers of sexual assaults reported to Canadian colleges and universities are surprisingly low, but there are concerns that statistics under-state the problem and are based on the reluctance of victims to come forward, according to date reported by the CBC.

As a result, campuses across Ontario have begun putting policies in place so women can report assaults. At Humber, the Consent is Sexy program outlines the importance of consent and provides policies to guide bystanders or witnesses to sexual assault.

“Men and women included aren’t aware of this issue or that some actions might condition and promote a rape culture behaviour or mindset,” said attendee Melanie Crichton said. “This [march] will reduce risk and raise awareness.”