The display was organized by the Canadian Centre for Bio-Ethical Reform, a Calgary based anti-abortion advocacy group, as part of its country-wide campaign.

“They had very big posters of ten week old embryos, dead embryos and there were very graphic pictures which immediately sent me on a very uncomfortable day,” said Claire Jackson, an Event Management student, told Humber News. “I got extremely aggravated, very uncomfortable, anxious, it almost made me tear up.” 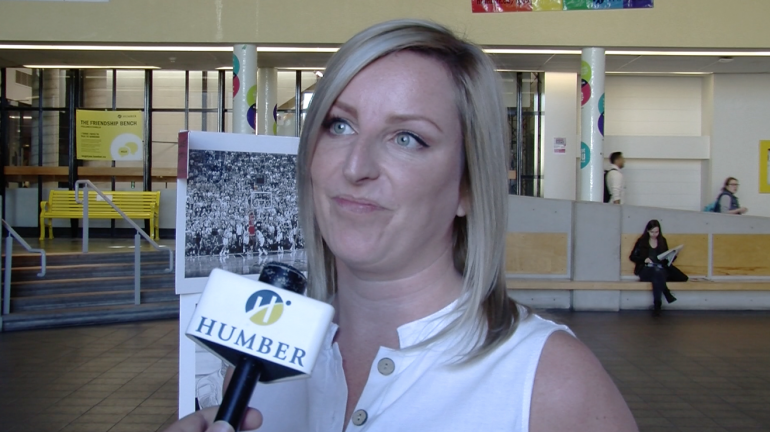 Claire Jackson speaks to HumberNews about CCBR’s demonstration at North campus on Wednesday.

Many students approached demonstrators to voice their displeasure and, in one instance, ripped up pamphlets in front of CCBR staff.

Humber College posted on social media that morning warning students about the protest and stating that Humber doesn’t “endorse their views nor do we have a position on either side of the pro-life/pro-choice debate. We did not invite the group to campus, nor did they seek our permission to visit.”

“The letter came out as CCBR arrived on campus,” said Andrew Leopold, Director of Communications at Humber College. “We considered a number of options … it was a fair balance to what we could do.”

Jackson said she did not see the warnings posted by the college and would have appreciated a notice on Blackboard or an email about the group’s presence before coming to campus that day.

All Ontario colleges received warning from CCBR in advance that the group could arrive on campuses at any time.
“The group sent notice around to all of the colleges saying they intended to do their activities on campus,” said Rob Kilfoyle, director of the Department of Public Safety.

In September, houses in a popular student neighbourhood in London were covered with anti-abortion door flyers. Although the flyers were distributed by a separate group in London, they were created by the CCBR. The CCBR also recently appeared at Sheridan College’s Trafalgar campus in Oakville.

“Nobody’s thrilled about it,” Kilfoyle said. “If we had our ‘rathers’ we’d rather they didn’t, but this is protected speech under the Canadian Charter of Rights and Freedoms.”

The organization has the legal right to demonstrate inside of post-secondary institutions because they are publicly funded Crown agencies.

Clarissa Canaria, one of the CCBR volunteers, said the organization goes to colleges instead of abortion clinics because campuses are “one of the most important places to have this dialogue.” 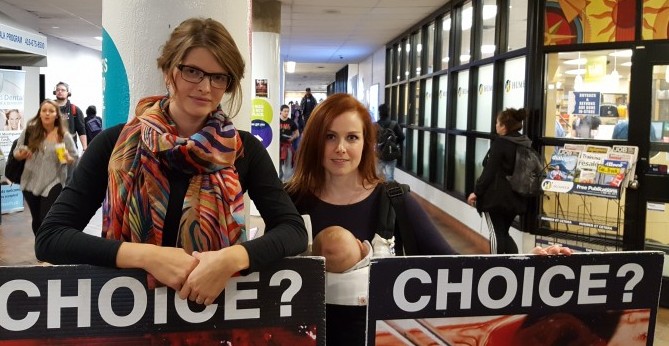 Maaike Rosendal and Katie Somers, members of the anti-abortion group, are allowed on college campuses because they are public space. (Tyler Lautenschlager)

Andrew, a second-year electrical engineering student who declined to provide his last name, said the graphic signs the group showed were only used as “shock value” and to provoke people.

“You have people having an emotional response, and they won’t think of things rationally,” he said. “In terms of the actual content of what they’re presenting, it’s all personal opinion.”

“The images the group showed yesterday, I think certainly fall into the category of disturbing or upsetting to some,” Leopold said. Despite the graphic content, Humber was very limited in what it could do to prevent the group from showing the images, he added.

“I didn’t believe that it was necessary for them to have those pictures,” said Jackson.

The graphic images are one of CCBR’s main tactics.

“Our goal is to make abortion unthinkable,” said Maaike Rosendal, one of the CCBR’s most prominent members. “When we show photographic evidence of what abortion actually does, we aren’t surprised when people become angry as a result.”

Humber is offering counseling services in the Student Wellness and Accessibility Centre located on the second floor of the LRC for any student who was affected by the display.
With files from Tyler Bloomfield, Britnei Bilhete and Sargon Jajjo