The Applied Suicide Intervention Skills Training (ASIST) teaches participants steps to support people in crisis. Its main goal is bringing them to safety. Suicide prevention instructor Brad Hutchinson started his lesson at Lakeshore that Saturday and spoke to a class of 14 trainees interested in saving lives.

“You don’t need any special skills,” said Hutchinson. “You already have what it takes by being in the room, and being willing to spend a weekend to learn how to better help somebody with thoughts of suicide.” 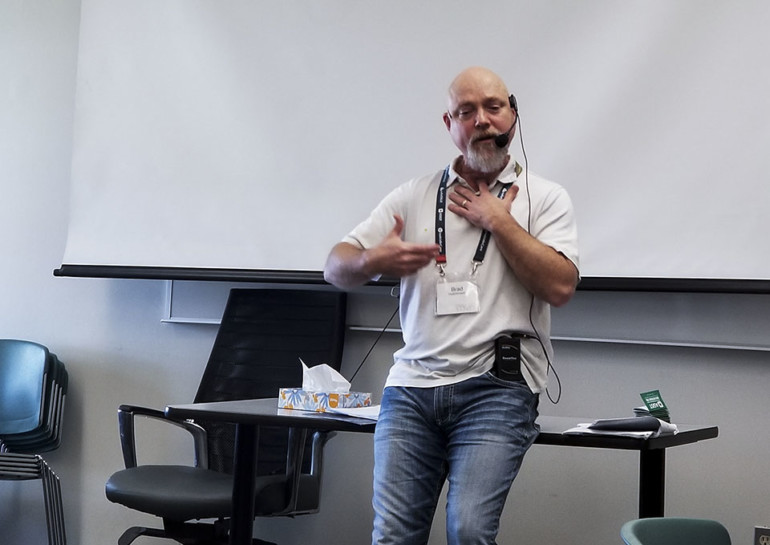 ASIST instructors Brad Hutchinson and Paula Cordeiro demonstrate role-playing, an exercise that puts trainees in the shoes of a helper saving the life of a person on a verge of suicide. (Clement Goh)

The workshop ran for two days and involved case studies and role-playing to help trainees who attended get out of their comfort zone. By creating this tension, it simulates a real-life experience, which support workers face daily.

Its most intense exercise involves giving somebody a reason to live in under five minutes. Trainees paired up for the activity during the workshop, with one person attempting to help another who is contemplating suicide.

“That’s the biggest part – is getting past that first fear,” said Hutchinson. He said he believes the role-playing exercises help people remember the challenge of convincing someone to live.

“Everybody did them — everybody was uncomfortable doing them. When you present that uncomfortable feeling, that gives them more courage and strength to an intervention,” he said.

ASIST also puts the safety of helpers first. During Hutchinson’s discussion, he laid out the importance of focusing on being able to help yourself before others.

“And within the ASIST two-day process, we find that it’s a balance between challenge and safety,” said Cordeiro.

“It’s so important, it’s critical and it teaches and offers these life-saving skills and tools and it’s very strength-spaced and capacity-focused,” she said. “And it focuses on people’s needs and that’s why it’s so applicable to any situation around the notion of suicide.”

Hutchinson and Cordeiro are former Humber students who graduated from the Police Foundations Program. Now, they continue supporting individuals in crisis at The Gatehouse, a safe space providing therapy and crisis support within walking distance from Lakeshore.

“There’s a certain optimism within the Humber environment, that people are setting off in their journey,” said Hutchinson.