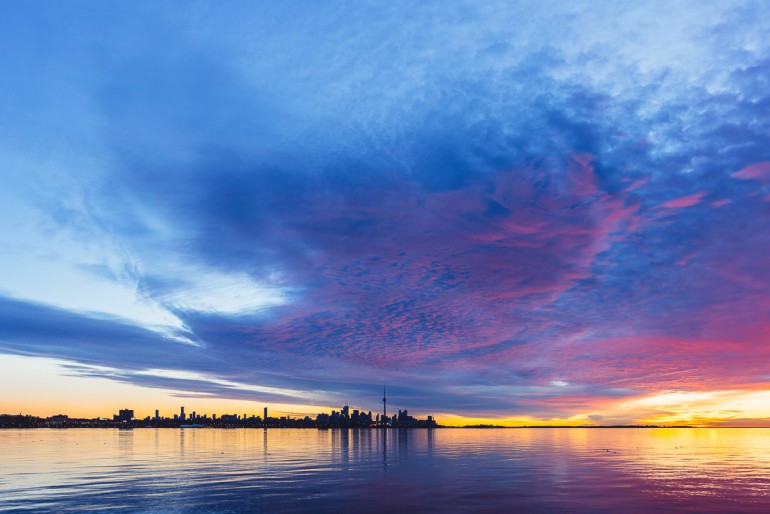 The First Light: A Toronto Sunrise Series Exhibit can be viewed at Lakeshore’s Interpretive Centre until March 17. (Taku Kumabe)

Cotton candy skies, yellow sunrises, and beautiful views that leave one in awe.

Those are just a few of the most beautiful things one can see at The First Light: A Toronto Sunrise Series Exhibit, at Humber College’s Lakeshore campus Interpretive Centre until March 17.

Taku Kumabe is the Etobicoke photographer and designer behind this amazing art exhibition. The photography exhibit focuses on showing the beautiful views of Toronto during the early morning.

The free exhibition is made up of unique photographs of the city from the perspective of lake views and waterfront parks in Etobicoke.

Kuambe began his Sunrise photo series project five years ago when he and a group of friends were out wandering a park one morning. It was then when he watched the sunrise and experienced something.

“It was the realization that every sunrise would be different was essentially the trigger to continue going outside to see what I would get that morning,” he said. “Now five years later, I have seen so many different sunrises but I am nowhere close to getting sick of doing this.”

Kumabe has captured hundreds of images of Toronto’s most scenic locations and turned them into masterpieces. Not knowing what he may find while wandering in a park or any location is what feeds his curiosity and makes those around him wonder what sparks his inspiration.

“I love being outdoors in nature, and there really isn’t any better way to start off your day than to watch a brilliant sunrise over the lake,” he said. “It energizes you, inspires you, and most importantly makes you appreciate what you have in front of you.”

He said his photos hopefully captures how he feels witnessing an event with his eyes.

“Sometimes it’s hard to believe colours can be so vibrant and varied, and those are the mornings that make this series so rewarding,” he said.

“I couldn’t have asked for a better place to showcase my sunrise photography for the first time, since it was literally right beside Colonel Sam Smith Park, which plays a huge role in this series,” he said.

He feels the local community and Humber College students can really relate to the photos.

“It was a perfect match if you ask me,” Kuambe said.

The exhibit is also a reminder to stop and enjoy the simpler things in life, and notice there’s beauty in the simplest views the city has to offer.

“I hope this series motivates and inspires people to go out and explore their neighbourhoods wherever they may be,” Kuambe said. “Toronto is blessed to be right by one of the great lakes, offering some breathtaking vistas — all you have to do is go outside to find these places.”