Swinging into spring for a cause

With the Pickup Swing Ensemble playing In The Mood by Glenn Miller, the music was bumping and the crowd was jiving at Humber’s first 1940s Swing Fever dance.

Swing Fever is the event project for a group of Postgraduate Event Management students, said Melanie Baird, Chair of the Swing Fever organization.
Baird’s group of 12 students worked diligently on the project since the beginning of January. 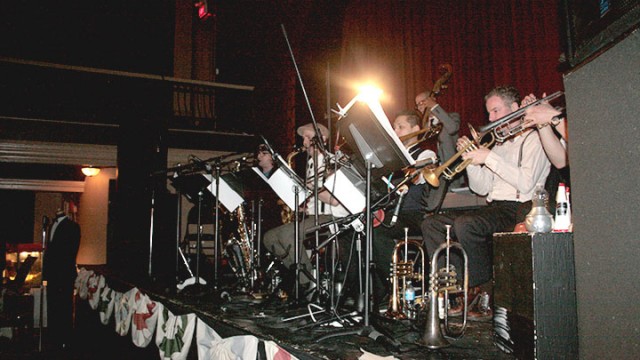 They created the theme, wrote the proposal and organized the entire event themselves, she said.

“Swing Fever is trying to get dance enthusiasts out to enjoy a great night of live music and swing dancing,”said Baird.

The money raised from the event will be donated to The Royal Canadian Legion and the Humber Event Management Program, according to Baird.

“The Royal Canadian Legion is an organization that cares for veterans, promotes, remembrances and offers services for current Canadian troops,” said Baird.

“We want the younger generation to have the opportunity to see the role this organization plays within the lives of so many Canadians,” she added.

The Swing Fever theme was chosen based on a requirement to stand out and be unique, said Swing Fever group member Stephanie Roy.

The group recognized that many themed events focused primarily on the 1920s The Great Gatsby or 1950s and ‘60s Mad Men era, she said.

“We knew swing bands were the ‘pop’ music of the ‘40s and we jumped at the chance to have such fantastic music,” said Roy.

“When people think of the 1940s they think of WWII which was such a large part of this decade,” said Baird.

“People tried to escape all the despair and turmoil for just one night by going out to a swing dance,” she said.

A passion for dancing brought guest Chelsea Futers to Swing Fever, she said.
Futers dances within her community and thought the event would be a great way to practice her skills, she said.

“I really enjoyed the dance. The venue is really nice, it’s really 1940s, and everyone is dressed so well” Futers said.

The Swing Fever dance took place at The Great Hall located at 1080 Queen St. W.
It was love at first sight when Swing Fever members were choosing the location for the event, said Roy.

“The Great Hall has some banquette booths for seating that were designed and made for a previous WWII themed event,” said Baird.

The “decor was simple, the stage was the perfect size for our eight piece band and the floor was worn in wood, perfect for dancing,” she said.

“Our team is incredibly proud to have developed such a unique night out. With the help of Humber, we’ve been able to make this a reality,” Roy said.