Toronto Public Health wants to put a stop to the smoke clouds of Shisha in local Hookah lounges and cafes.

The health advocates want to regulate the indoor use of Hookah water pipes in business establishments across the city due to recently reported health concerns.

“When it comes to the herbal product (Shisha) generally, some recent research conducted in Toronto suggests indoor air quality is affected by Hookah use,” said Julie Amoroso, a research consultant with Toronto Public Health.

Amoroso said the research showed unhealthy level of air pollutants and particulates such as carbon monoxide.

Medical Officer of Health for Toronto Dr. David McKeown recently reported there are concerns that smoking shisha tobacco exposes individuals to levels of cancer-causing chemical that are similar to those associated with the use of conventional tobacco such as cigarettes.

Amoroso said part of the proposed regulation is aimed at advocating to Health Canada making modifications to the way tobacco is currently defined under the federal Tobacco Act.

“Right now, because the Tobacco Act doesn’t specifically talk about Hookah there isn’t a lot our enforcement staff can do,” she said.

Amoroso said since these products aren’t covered under the act there’s no requirement for manufacturers to display health warnings, toxic emission data or mention if it contains tobacco on packaging.

She said the proposed recommendations would like to see Hookah products undergo the same labeling process as conventional tobacco.

Amoroso said although there’s currently no ban on indoor smoking of non-tobacco products in Toronto business establishments it’s hard to determine if only these products are being smoked in Hookah lounges. 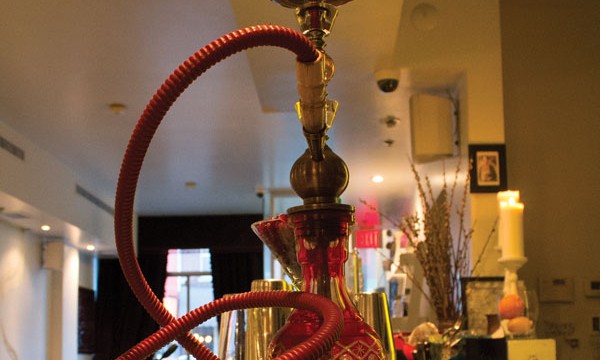 “Because of this there’s a possibility that tobacco Hookah is being used indoors and this makes us concerned about some of the same health concerns,” she said.

Amoroso said the province is looking at expanding the Smoke-Free Act to allow tobacco enforcement officers to be able to seize products sold at hookah bars so they can be tested.

“This would mean if they tested it and they were able to prove it contained tobacco then they could issue a ticket on an establishment,” said Amoroso.

Samira Mohyeddin the owner of Banu, a downtown restaurant that offers the use of Hookah smoking. She said although her eatery doesn’t primarily function as a Hookah café, the proposed regulations would result in a loss of revenues.

Amoroso said a recent study of the air quality of 12 Toronto Hookah lounges has Toronto Public Health concerned with all products used with a Hookah, not just Shisha. She said the main component some studies found to contribute to the poor indoor air quality include the charcoal used to heat the device.

“That’s what has been hypothesized as the constituent that can cause harmful air quality, and that’s why it may not matter whether it’s tobacco being used or non-tobacco,” she said.

“These air quality tests found levels that are higher than the amount that’s considered safe to be in, particularly for people that are in these establishments for over eight hours,” said Amoroso.

Associate Dean of Humber’s Bachelor of Nursing program Lenore Duquette said anytime a burned product is inhaled into the lungs there’s a potential for damage.

“Anything that’s in the air that you’re inhaling, depending on the person, can be an irritant to the airways and the respiratory track,” she said.

Duquette said the burning of charcoal can create harmful level of toxins such as carbon monoxide that contribute to poor air quality.

“The same as if you’re using charcoal in your barbeque, you don’t do it in the house just because of the fumes,” she said.

The proposed regulations aims at addressing the growing popularity of Hookah smoking among young people, in particular young people who view it as a recreational pastime not associated with any cultural tradition.

Amoroso said as far as Toronto Public Health is concerned this wasn’t the demographic that was using it before.

“There are certainly concerns discussed by health advocates about the access to youth and making smoking seem like a healthy behaviour,” she said.

“Particularly, if we find that tobacco is being used indoors because then these products can be used to hook people onto tobacco products,” said Amoroso.

“I find that assertion to be quite troubling,” Mohyeddin said. “The whole cultural imperative that they’re bringing in is a little offensive because it seems that they’re only now starting to care because people who aren’t of that culture are smoking it.”

Mohyeddin says the practice of Hookah smoking has been misrepresented as a ritualistic cultural practice, and something that can be a gateway to cigarette smoking.

“I think we need to stop looking at it this way because even in our culture it’s a social activity, this isn’t a religious experience,” she said. “I think that people underestimate the social and psychological factor of this smoking because it’s a very social thing that people do.”

Mohyeddin said she doesn’t believe people are necessarily saying to themselves that this is an alternative to smoking.

Amoroso said growing social activities that seem acceptable but may not be completely legal is always an important consideration for any initiative taken by Toronto Public Health. Even for those young people above the legal smoking age she said public health has raised concerns about the proximity of Hookah establishments to post-secondary schools.

“That would be mostly people who are over 19, but there’s still a concern about these people being pretty young and being exposed without, possibly, knowing the risks,” she said, adding that some young people may not know a product being used may contain tobacco.

Amoroso said consultations and feedback from business owners and others who may have an interest in the issue will play a significant role in the decision making process.

“The report suggested that Toronto Public Health does a broad consultation to review options to address the problem,” she said. “There hasn’t been an actual plan to prohibit them for sure, but that’s just an option we’re looking at.”

Mohyeddin said the move to increased regulation is much more plausible than a complete prohibition.

“That would be absurd, I mean you’re talking about some 65 establishments in Toronto and over 100 in the GTA. They can’t just shut them down,” she said.

Mohyeddin said she predicts the city will start to license Hookah cafés and perhaps charge a special tax like they do for other tobacco.

“They will tax the non-tobacco herbal product and maybe put an age limit on these establishments,” she said.

Mohyeddin said she has given a deputation on behalf of Banu at the recent board of health meeting.

“I’m all for regulating it, I really am,” she said.

“I just don’t want this to be another situation (for additional expenses). We pay so much in terms of taxes, as small businesses, to operate in this city its ridiculous,” Mohyeddin said.

“The board of health was incredibly interested in hearing what (business) operators have to say, and in coming up with options that won’t antagonize operators and cause problems for them,” said Amoroso. “At the same time, Toronto Public Health’s priority is to address health concerns.”