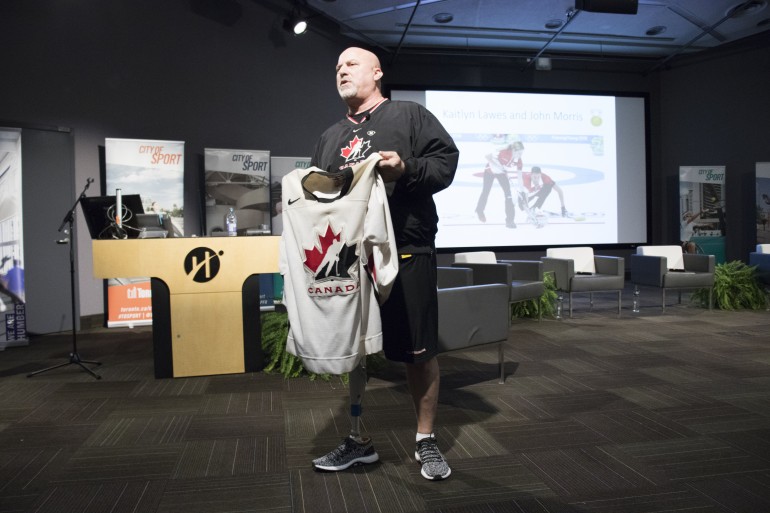 “We have an opportunity to [show] kids in this country, who are disabled, who are looked at like they’re different, that they’re not different, they’re the same as us,” he said.

Rosen lost his leg in 1999 due to complications with knee replacement surgery but that didn’t hold him back from pursuing a career in sport. He made Canada’s Paralympic Sledge Hockey team at 40 and proceeded to play in the following two Paralympic games.

Rosen is now a motivational speaker and works closely with the City of Toronto and with programs that stress the importance of inclusion and diversity in sport.

“I want the people to understand the ability through disability,” he said. Rosen said creating awareness and understanding through inclusion in sport is the main reason that he speaks at numerous events for the city.

Jennifer Bennett, a professor in Humber’s Sports Management programs, said the planning of the summit was integrated into the second-year Sports Event Management class.

“They’ve been working with the partners, then liaising back to the students to help make this event work,” she said.

The summit was originally supposed to be held in November but Bennett said the five-week college faculty strike last term put a halt on the entire process.

Second-year sports management student Scott Hayden was one of the four chairs of the event.

Both worked on this project since the beginning of September and were excited to see their hard work pay off.

The summit acted as a fundraising event that gives money to kids who can’t afford to get involved in organized sports in Toronto. It also acted as a community building and networking event for anyone who is involved in sports programs and organizations.

Rosen recognized the summit succeeded in informing members of the community regarding real issues affecting current societal issues in sport.

“We have to educate everybody and this is why this forum is fantastic, having it at an incredible school like Humber which has so many different cultures, it really is a world-class facility,” he said.