The Toronto Transit Commission will launch a study of the feasibility and costs of moving to a time-based transfer system from its current one-way trip based transfer.

TTC board members voted during its January 2014 meeting to look into the initiative, after a 2013 study from Toronto Public Health titled “Next Stop Health: Transit Access and Health Inequities in Toronto”.

Time-based transfer would allow riders to get off the TTC and go about their business for a period of time and then hop back on the TTC using the original transfer afterwards. 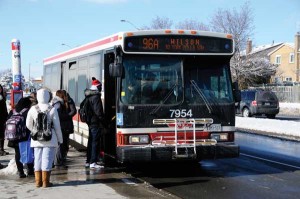 Currently, TTC transfers are good for a one-way trip, but there is a time-based transfer pilot project used on the 512 St. Clair streetcar route.

Cost remains the largest barrier to this proposal.

“The TTC would be looking at $20 million in lost fares for a two-hour transfer and $12 million for a 90 minute one,” said TTC spokesperson Danny Nicholson.

“The TTC would ask the city or the province to increase their subsidy to cover this. It’s not going to come out of our current budget,” he said.

The reaction from Humber students were mixed.

“I don’t usually take the TTC, but my car is broken down right now. A time transfer wouldn’t change my driving because of how far away I live,” said Emily Burgos, 21, a second-year business student.

“I only buy a Metropass sometimes,” said Thomas Cornish, 22, a third-year film and television production student.

“I would appreciate this very much if they did it. I would definitely take a few more short trips to grab stuff,” Cornish said.

Other cities across Canada such as Halifax, Edmonton, Regina, Winnipeg, Hamilton and Vancouver use time-based transfers.